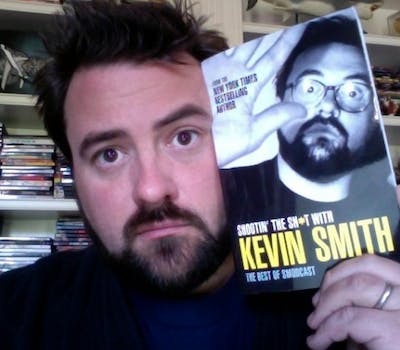 Smith has enlisted the top-tier studio to train him in the ways of the "YouTube generation."

The 42-year-old filmmaker—responsible for such slacker generation classics as Clerks, Mallrats, Chasing Amy, and Zack and Miri Make a Porno—announced today that he’ll ink a deal with YouTube’s Maker Studios, the Los Angeles production house whose work with KassemG, Timothy DeLaGhetto, the Shaytards, and Lloyd Ahlquist’s Epic Rap Battles of History has done wonders of late to bridge that gap between YouTube and TV.

No terms of the agreement have been publicized as yet, but Smith has made it known that Maker will now oversee production for his SIT! SModCo Internet Television! channel, an operation the New Jersey native runs in tandem with fellow filmmaker Scott Mosier. The channel has been off and on with content since first going live last May, but it’s seen a serious revival in the past few weeks, with cartoons, comic culture coverage, and even a few cameos from Silent Bob.

Speaking with the Hollywood Reporter, Smith chalked credit to Maker Studios, who he believes will help usher his channel into the new age of YouTube programming.

“I’m an old moviemaker, unfamiliar with the newfangled ways of the YouTube generation,” Smith said after announcing the deal. “Getting in bed with Maker allows me and SModCo to learn how the cool kids do things. I look forward to their patience as they teach a fat Padawan how to be a Jedi at YouTube the Maker way, and I plan to shoe-horn myself into all their fine programs.”

The deal comes as good news in the wake of a rather turbulent few months around Maker’s headquarters. In October, the company split with recently dethroned YouTube king Ray William Johnson (Johnson said that Maker wanted too high a percentage of profits) but still managed to close out 2012 on top, securing a $40 million investment from Time Warner Investments.