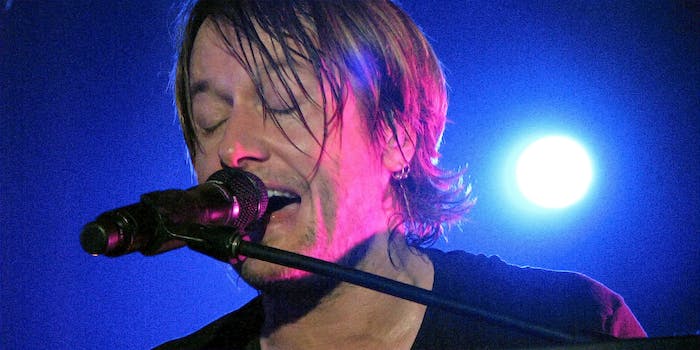 Reactions have been mixed.

Country star Keith Urban debuted a brand new song at Wednesday night’s CMAs, and it’s one he apparently “dropped everything” to record after the Harvey Weinstein scandal broke in October.

The lyrics have drawn mixed reactions from listeners. Critics worry the song is too broad—verging on pandery—about what is ultimately a serious (and dangerous) cultural issue:

Keith Urban's "Weinstein-inspired" ode to women "Female" is the "We Didn't Start the Fire" of absolutely atrocious takes. pic.twitter.com/CuCuP493wB

tfw everyone is colluding to destroy u pic.twitter.com/HazNEUxq5b

I have prepared a useful way to gender swap Keith Urban's "Female" Lyrics, should you desire. pic.twitter.com/YL67t2kk8A

Meanwhile, proponents of “Female” seem thankful a country music artist is finally participating in these cultural conversations in a timely manner:

We loved everything about @KeithUrban's performance of "Female." #CMAawards https://t.co/kWTN7iu7Xk

In an interview with Billboard, Urban said his relationship with wife Nicole Kidman and their daughters motivated him to rush-record the song this Halloween.

“As a husband and a father of two young girls, it affects me in a lot of ways,” he said, taking a tack many writers have criticized throughout the Weinstein press firestorm. “As someone who knows a woman” still centers the male as the person whose feelings are important, as opposed to suggesting that women, separately, have feelings and boundaries it’s important to respect whether a man is associated with them or not.

Kidman just took home the Outstanding Lead Actress Emmy this year for her role as a character who survives domestic violence on Big Little Lies.