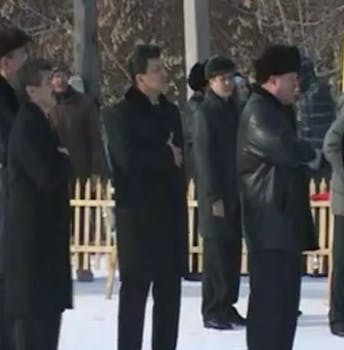 For a split second, Kazakhstan had the greatest national anthem on the planet.

At the opening ceremony of a regional ski festival in Kostanay, the country’s anthem “Menin Qazaqstanim” was set to be played after a speech by one of the guests of honor. However, things took a slightly embarrassing turn.

Although the mix-up was corrected quickly, the hilarious audio bungle was recorded and placed on YouTube for the world to see.

The red faces and awkward reactions to Ricky Martin’s “Livin’ La Vida Loca” being played is priceless. As noted by The Daily What, the distinguished guests at the event included regional administration head Nuraly Saduakasov. It’s not quite clear whether the blunder was a deliberate prank or a genuine mix-up—either way, the result is amazing.

YouTubers enjoyed the clip too, with many of the comments on the video referencing Kazakhstan’s most famous fictional resident, Borat Sagdiyev.

“I was expecting to hear – Kazakhstan is the greatest in﻿ the world, all other countries are run by little girls,” commented camaroz28silver.

Another YouTuber, willyboymega, wrote,“Borat was in charge of the music…﻿”

Perhaps more countries should change their national anthems to pop hits. A world where a Rolf Harris’s “Tie Me Kanagroo Down, Sport” was the Australian national anthem could only be a better place.