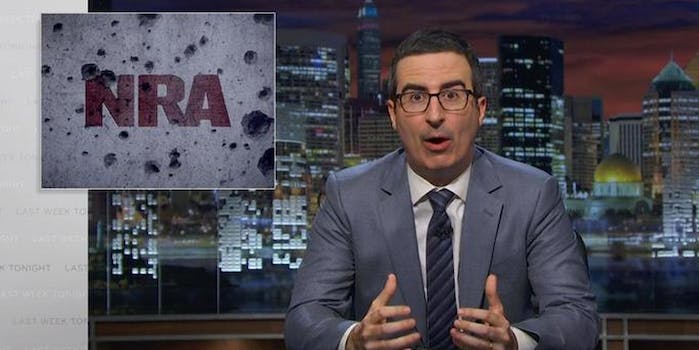 John Oliver rips into the NRA after Orlando shooting

'It doesn’t take much to outnumber the NRA.'

In the week after the Orlando shooting, we’ve seen pushes in Congress for gun control, particularly with Sen. Chris Murphy’s (D-Conn.) nearly 15-hour filibuster. Now John Oliver is joining the fray and revealing just why it’s been so difficult to get anything done about it.

It’s because of the National Rifle Association (NRA), which Oliver describes as “like PETA, but for guns and effective,” whose members are highly motivated in expressing their displeasure for any gun control legislation. Some members of Congress, many who receive money from the NRA, want to see proof that gun control would prevent violence, but the NRA got to that too: The Centers for Disease Control, a major funder of academic research, cannot do any research pertaining to gun violence thanks to the Dickey Amendment.

Any measures to remove it have been stopped by Congress—even as recently as last week.

But in order to do anything, Oliver says people have to get mobilized—and often.

“If and when a proposal is on the table that you like, you’re going to have to make all those calls again,” Oliver said. “It doesn’t take much to outnumber the NRA. Planet Fitness members outnumber them. But if you want to see serious changes, you actually have to show up every fucking day.”