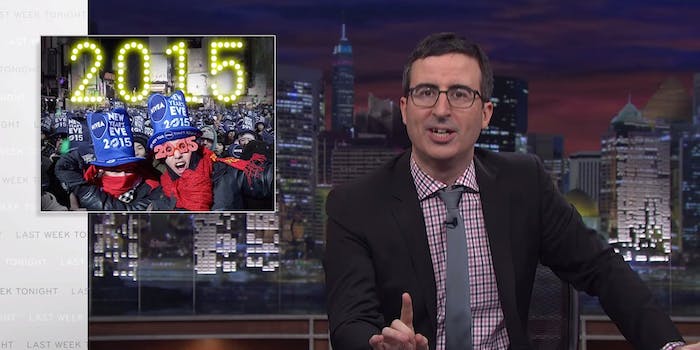 Why do we put ourselves through this every year again?

It’s a holiday that unites all of us around the world—in hating it.

John Oliver, who’s still on hiatus, continues his tradition of returning briefly to lampoon a holiday we seem to love but actually truly, truly despise. This time his target is New Year’s Eve, which is terrible even away from the madness of Times Square. We just seem to forget that outside of Dec. 31.

“It combines three of the least pleasant things known to mankind: forced interaction with strangers; being drunk, cold, and tired; and having to stare at Ryan Seacrest for five solid minutes waiting for him to tell you what the time is,” he explained.

Sounds just awful, right? Good thing Oliver is here to help, and he’s got some pretty solid advice for getting you out of that party you didn’t really want to attend but went anyway.

Scheduling a Lord of the Rings marathon on New Year’s Eve would also be a valid excuse, although you risk the person you’re trying to avoid wanting to join in, so proceed at your own risk.