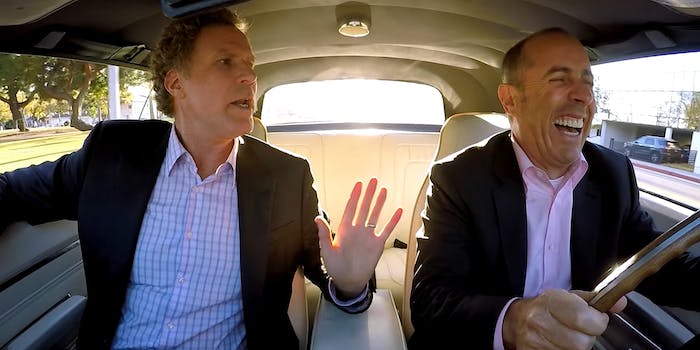 Jerry Seinfeld moves to Netflix, brings ‘Comedians in Cars Getting Coffee’ with him

What's the deal with people moving to Netflix.

Jerry Seinfeld and his Emmy-nominated webseries are cruising over to Netflix.

As part of a major deal he signed with the streaming service, which first became known Tuesday, Seinfeld will bring 24 new episodes of Comedians in Cars Getting Coffee to the streaming platform in late 2017, with more slated for 2018. The 59 previous episodes of Comedians in Cars will also come to Netflix, after previously being hosted on Crackle, which is owned by Sony—a company Seinfeld worked with for decades.

Seinfeld will also make two stand-up specials for Netflix, which has invested and expanded its comedy platform with exclusive content from comedians in recent years, a development that attracted Seinfeld to the brand.

“When I first started thinking about Comedians in Cars Getting Coffee, the entire Netflix business model consisted of mailing out DVDs in envelopes,” Seinfeld said in a statement. “I love that we are now joining together, both at very different points. I am also very excited to be working with Ted Sarandos at Netflix, a guy and a place that not only have the same enthusiasm for the art of stand-up comedy as I do, but the most amazing technology platform to deliver it in a way that has never existed before. I am really quite charged up to be moving there.”

However, Netflix’s deal with Seinfeld does not include his hit sitcom Seinfeld, which streams exclusively on Hulu, after it bought the exclusive rights in 2015 for $180 million.