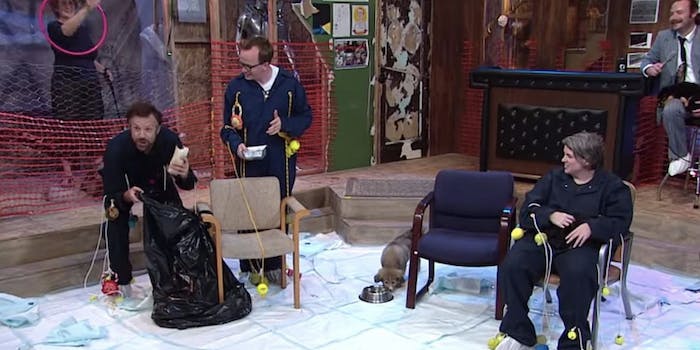 Here is Jason Sudeikis eating a chimichanga near dog doo

They say half of taste is smell... Apparently not for Sudeikis.

Finally, two of everyone’s favorite things are in the same room together: cute puppy dogs and delicious chimichangas. Unfortunately, that room is also filled with an insane amount of dog doo.

Saturday Night Live’s Jason Sudeikis, holding a small, wire-haired terrier, spoke about the complete absence of his sense of smell on the Chris Gethard Show on Fusion this week. The show—which usually includes a human studio audience on set—paid homage to man’s best friend this week by devoting the episode to entertainment for dogs. This consisted of replacing the on-set audience with a variety of dogs. But, as every pet owner knows, with dogs comes their inevitable excrement.

“I can see the poops, I can see the pee, but I can’t smell them,” Sudeikis told Gethard, the show’s titular host, who was sitting next to a garbage bag full of the doo. To prove his point further, Sudeikis walked over to the bag on Gethard’s side and took a big, scentless whiff of its contents to the dismay of the host.

“Oh my god, really? Nothing!” Gethard exclaimed. “I feel like my face is in a toilet right now.”

In the spirit of the no-holds-barred zaniness of the show, Sudeikis took the gag one step further. “I could eat a steak right now. I could eat a chimichanga fine,” he said.

Lo and behold, the show’s crewmembers were able to quickly find a chimichanga—which is more or less a fried burrito served in Mexican restaurants—and Sudeikis held true to his promise. He ate that chimichanga mere inches from the pile of possibly steaming dog doo.

Gethard couldn’t get a bite down the hatch, the smell was too much for the funnyman. At least he tried. That’s more than I could say for myself. I can’t pick up my chihuahua’s minuscule number twos.

Screengrab via The Chris Gethard Show/YouTube