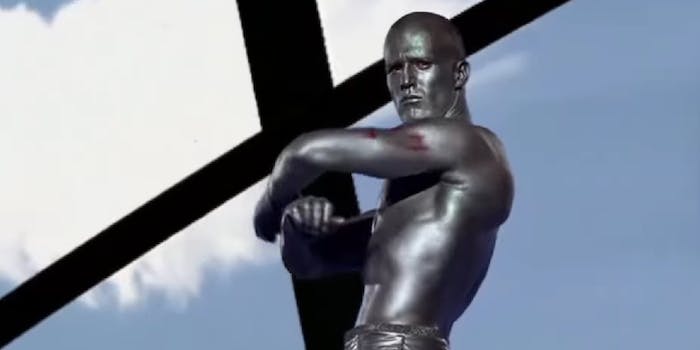 Jason Statham's got the moves.

If you’ve got Jason Statham up on a pedestal as one of your favorite action superstars to watch onscreen, it’s probably because of his immense badassery in films like The Transporter, Crank, The Expendables franchise, and Lock, Stock and Two Smoking Barrels, to name a few. That, or the fact that he’s pretty damn fine to look at.

If your reason for fandom is more of the latter, then you would probably appreciate the clever detective work of some folks on Reddit who somehow managed to scour the depths of YouTube for videos featuring a scantily clad Statham, body-groovin’ to the tunes of incredibly cheesy ’90s European dance music.

The first video uncovered is a song titled “Comin’ On” by the Shamen, an EDM band from Scotland. The “special effects” are a bit cringe-worthy, but it might be worth it if you want to see multiple copies of an oiled-up Statham. Gyrating. In a leopard-print Speedo.

If you prefer Statham completely covered in shimmery body paint, the music video for Erasure’s “Run to the Sun” is a lot easier to take in, and has Statham strutting his stuff atop a revolving globe as well as performing gymnastic stunts.

Had no idea he was so talented? He’s a jack of many trades. Not only is he good with a gun on camera and was a well accomplished backup go-go dancer; he has also competed in an international diving competition on behalf of England.

If you want to remember what Statham looks like fully clothed, you can still catch Furious 7 in the cinemas.