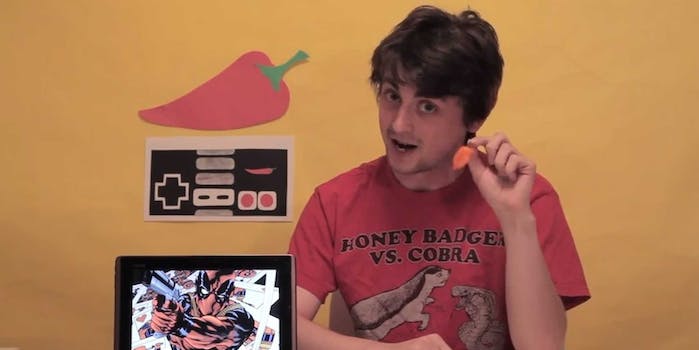 You can trust Jared Rosen's reviews, because a man in this much pain has to choose his words carefully.

A lack of bias? A nuanced understanding of the medium? Some insight into the development process?

How about a blazing-hot chili pepper?

Jared Rosen, host of “Hot Pepper Game Reviews,” is a pioneer in the seldom-explored realm of video game reviews powered by the effects of a hot pepper. In his debut video, he reviews the game Deadpool, from High Moon Studios—but not before chomping down on a habanero.

After swallowing the entire pepper with incredible difficulty, Rosen proceeds to the review. Unfortunately, the special effects that bring Deadpool to life are no match for the habanero inflaming Rosen’s inner workings. He spends the remainder of the video painfully sputtering out a rather solid opinion of the game.

Although the video has been up for less than a week, Rosen already has his fans. Several YouTube users were quick to comment on his unique take on video game reviews. They were also quick to point out the host’s close resemblance to both Harry Potter and Frodo.

“This is the stupidest combination for a video. Subscribed,” said iGyman.

“Why do I tend to trust a man more because he’s applying three degree burns to the? inside of his face,” said CheckmateWithPawn.

“Its funny now, but. I feel like if you try to do this with every video it’ll lose its novelty very quickly,” redditor duodecillian said.

What’s more, redditor thumb22 revealed himself as the brains behind the combination, mentioning that the pepper Rosen consumed was his first-ever introduction to the food.

“We actually had a blast filming it and since this one seems to be doing well on the internets I think we’re gonna do more,” he said.

Might we see a jalapeño pepper-fueled opinion of Diablo 3 in the near future?