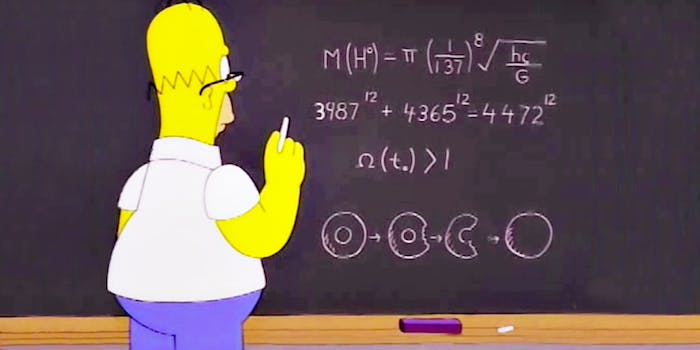 D’oh! Homer Simpson figured out the Higgs boson before scientists did

The normally oafish character figured out one of the biggest scientific discoveries years before physicists did.

The Simpsons has been on TV for so long that there’s a phrase signifying when a show or a person was about to do something that had already played out in Springfield weeks or years before; South Park even devoted an entire episode to mocking the phenomenon. And it turns out, in an episode that aired nearly 17 years ago, The Simpsons got to one of the biggest scientific discoveries in recent memory before the world’s top physicists did.

In the 1998 episode “The Wizard of Evergreen Terrace,” which aired during The Simpsons’ 10th season, Homer Simpson decides to follow in Thomas Edison’s footsteps and become an inventor during a midlife crisis. At one point, Homer is seen working through a complicated equation, which, along with the math, features a number of donut drawings—Homer’s favorite. Even when the “Every Simpsons Ever” marathon took place late last year, the episode likely played without much fanfare.

But according to Simon Singh, who wrote The Simpsons and Their Mathematical Secrets—which looks at all of the math hidden in the longtime cartoon—the equation on Homer’s chalkboard predicts the mass of the Higgs boson, or the God Particle, which was discovered in 2012 (and confirmed again in 2014).

According to the Daily Mail, the appearance of the equation in The Simpsons was no accident. David X. Cohen, one of the writers of “The Wizard of Evergreen Terrace,” had contacted David Schiminovich, a high school friend and astronomer who was researching the Higgs boson, about it. The equation on the board is based on his work.

That equation doesn’t just figure out the Higgs boson. Numberphile’s Brady Haran points out in a 2013 video that part of the equation defies Fermat’s Last Theorem and comes close to adding up. We now know why.

If a throwaway equation ended up predating the Higgs boson, we can only imagine how many more discoveries are hiding in the background of Simpsons episodes.