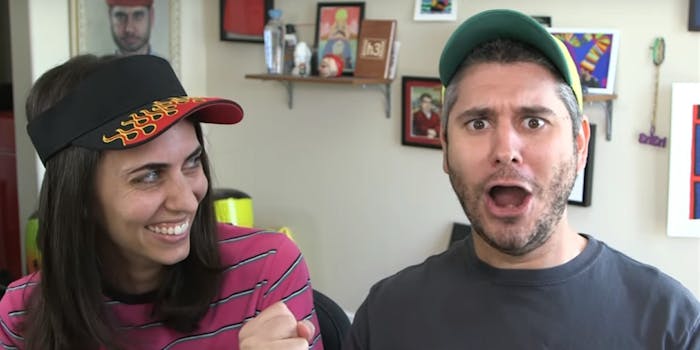 It's a major milestone for reaction videos, fair use, and the future of YouTube.

Ethan and Hila Klein, the couple behind the popular channel, posted a video on Wednesday detailing the victory behind a copyright battle that started back in May 2016. The Kleins set up a legal fund via GoFundMe after YouTuber Matt Hosseinzadeh sued them for copyright infringement, for using a clip of one of his pickup videos in one of their reaction videos.

This is common practice on YouTube, but Hosseinzadeh, whose videos have been criticized as misogynistic, was apparently upset that they used his video and portrayed him in a negative light, which opened up conversations about how fair use law should be used and what constitutes fair use. The Kleins updated fans in February, and Ethan described the drawn-out legal process, and the financial drain, as a “cloud of doom.” In the past year, H3H3 has seen other controversies.

More than a year later, a verdict finally was delivered. According to a New York district judge, H3H3’s video does “constitute fair use as a matter of law.”

“Thanks to Matt, fair use is alive and well,” Ethan says in the video. In an email to the Daily Dot, Klein says he’s “extremely relieved” and that this decision is a major one for YouTubers who make reaction videos:

All of our work for the past four years is validated, as there has never been a court opinion about reaction videos. The judge called our method of criticism “quintessential,” which is a huge win for us and the YouTube community. I’m extremely grateful to everyone who supported us along the way.