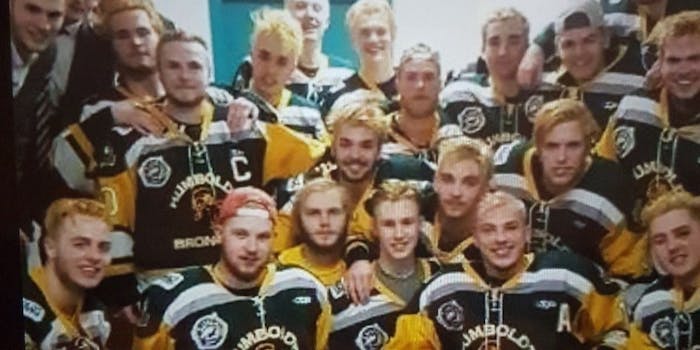 The country and the sport are in shock.

A bus carrying a Canadian junior hockey team has reportedly killed 15 and injured 14 more after a collision with a semi truck on Friday in Saskatchewan. On Saturday, the country of Canada began mourning the loss of so many teenagers that played for the Humboldt Broncos.

Now, a GoFundMe account that will send the donations it receives to those affected by the crash has raised hundreds of thousands of dollars in a matter of hours.

The campaign was begun by Sylvie Kellington, a Humboldt resident who said her son played for the club team last year.

She wrote, “As you know The Humboldt Broncos Junior A team was involved in a serious accident. Please help us raise money for the players and families affected.  Money raised will go directly to families to help with any expenses incurred.”

On Saturday, the country and the sport of hockey were in a state of shock and tears.

I cannot imagine what these parents are going through, and my heart goes out to everyone affected by this terrible tragedy, in the Humboldt community and beyond. https://t.co/2cIn2CTy08

Mike Babcock was clearly emotional when speaking about the Humboldt Broncos tragedy.

Here is what he had to say. pic.twitter.com/3XQkmtITG3

Stars head coach Ken Hitchcock opened his postgame interview with a message to the @HumboldtBroncos and those affected. pic.twitter.com/0LS2IOwnAV

I saw the #MJvsSC game tonight but didn’t watch, heard it but didn’t listen. I can’t imagine what those close to the tragedy are enduring tonight. My heart is broken. #PrayersForHumboldt pic.twitter.com/cEsNWV0daR

Editor’s note: This story has been updated to show the latest donation totals.