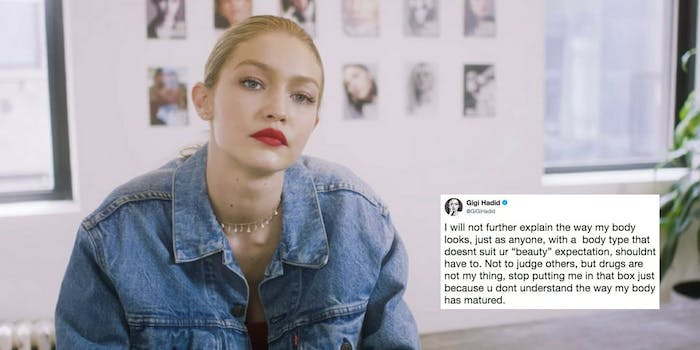 Her story resonated with many others diagnosed with Hashimoto's disease.

Gigi Hadid‘s critics might want to think twice before going after another person’s weight—model or not.

On Monday, after a walking at New York Fashion Week the previous Thursday and Friday, the model addressed speculation that she’s “too thin” and possibly using drugs to achieve her small figure on Twitter, opening up about the diagnosis that’s been the cause.

Hadid, 22, shared that when she began modeling at 17, she had yet to be diagnosed with Hashimoto’s disease, a condition that makes the immune system attack the thyroid gland. According to the Mayo Clinic, the disease causes symptoms such as fatigue, unexplained weight gain, joint pain, and muscle weakness. As a result, she faced inflammation and weight gain, causing these same critics to say she was “too big for the industry“when she wasn’t allowed to wear a skin-revealing piece for Tommy Hilfiger’s fall 2015 show.

But after her diagnosis, Hadid wrote, she started medication and even took part in a medical trial to help balance her thyroid levels. She feels much healthier, she wrote, but as a result, she’s skinnier—even thinner than she wants to be.

And that is that Hadid wrote. She won’t further explain why her body looks the way it does, nor does she feel anyone else should have to explain, either. Hadid also denied rumors that she uses drugs, asking people to “stop putting me in that box just because you don’t understand the way my body has matured.”

“Gigi took it on herself to fire back on social. She didn’t consult with anyone before she did that. Certain things she likes to handle on her own. Gigi keeps it real,” a source told E! about Hadid’s Twitter thread, saying she was “really hurt” by the comments on her appearance.

Across Twitter, other users with Hashimoto’s disease shared stories of their diagnosis, writing that they appreciated Hadid’s story for shedding light on the condition.

I have Hashimoto's as well as hypothyroidism. Along w/ severe IBS-D. I've put on weight & people assume it's because I eat junk food 24/7 & am lazy. Don't judge what u don't know or understand. I live w/ the stomach virus every single day. U would think I'd look like a stick.

I was diagnosed with Hashimoto’s diseases when I was 12 or 13. I didn’t know you have Hashimoto’s diseases and now I have so much more respect for you! Maybe you could write a bit more about your struggle with the disease. I’m really interested in knowing how you deal with it.💛

Ditto…Well, except I’m not a supermodel so there’s that small difference😉😉 Thank you for sharing @GiGiHadid I’ve never heard someone be so open about it and nail exactly how I feel. Thanks again, gorgeous girl ❤️

was also diagnosed with hashimoto’s a few years ago. i haven’t been able to get out of bed except to go to the bathroom for the last 6 days. can’t tell if it’s depression or extreme fatigue from hashimoto’s

Hadid’s friends, too, responded positively to her posts, supporting her in their replies.

Ultimately, Hadid said she wants people across social media to have more empathy for others—especially when platforms such as Snapchat and Instagram only allow for people to see so little insight into the actual lives of the people they’re watching.

“Use your energy to lift those that you admire rather than be cruel to those you don’t,” Hadid wrote.

Read Hadid’s full Twitter thread about her disease below:

For those of you so determined to come up w why my body has changed over the years, you may not know that when I started @ 17 I was not yet diagnosed w/Hashimoto’s disease; those of u who called me “too big for the industry” were seeing inflammation & water retention due to that.

Over the last few years I’ve been properly medicated to help symptoms including those, as well as extreme fatigue, metabolism issues, body’s ability to retain heat, etc … I was also part of a holistic medical trial that helped my thyroid levels balance out.

Although stress & excessive travel can also affect the body, I have always eaten the same, my body just handles it differently now that my health is better. I may be “too skinny” for u, honestly this skinny isn’t what I want to be, but I feel healthier internally and (cont)

(cont) am still learning and growing with my body everyday, as everyone is.

I will not further explain the way my body looks, just as anyone, with a body type that doesnt suit ur “beauty” expectation, shouldnt have to. Not to judge others, but drugs are not my thing, stop putting me in that box just because u dont understand the way my body has matured.

Please, as social media users & human beings in general, learn to have more empathy for others and know that you never really know the whole story. Use your energy to lift those that you admire rather than be cruel to those u don’t.