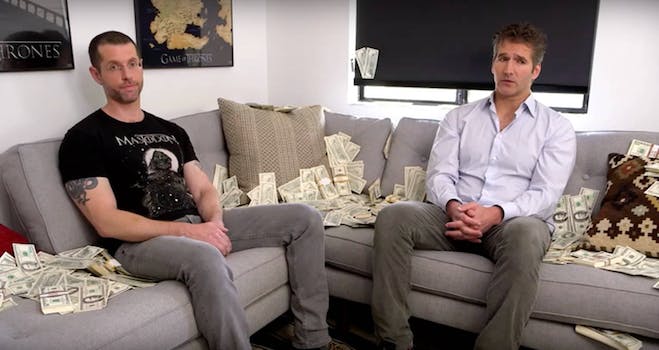 They forgot how the Internet worked for a moment.

Game of Thrones co-creators David Benioff and D.B. Weiss are really sorry about Sunday’s episode—but definitely not for reason you think.

Death is nothing new on the show, which has seen at least one character meet the darkness in every episode this season. But Hodor’s ultimate sacrifice and the reveal of what “Hodor” means—which occurred in the same sequence as Summer, the Three-Eyed Raven, and the Children of the Forest’s deaths—is by far the most profound series of deaths for fans in quite some time, and the reaction to it has been comparable to Ned Stark’s beheading and the Red Wedding.

Benioff and Weiss didn’t appear on Jimmy Kimmel Live to apologize for killing fan-favorite Hodor at the end of “The Door” because, well, they’ve killed loads of main characters—hundreds, by their estimate—and they’ve received a lot of money and prestigious awards for it. They just sort of forgot that the Internet would meme the hell out of it, and now nobody can get onto an elevator or walk into a building without somebody getting emotional at hearing “Hold the door.”

“So, so sorry,” Weiss said before they offered an impractical but effective solution to the problem. “People are the worst.”

When someone asks you to hold the door.. #GameofThrones #Hodor :(!! pic.twitter.com/FUM15dupde

in the elevator this morning #got #Hodor pic.twitter.com/aWfe9623Vt