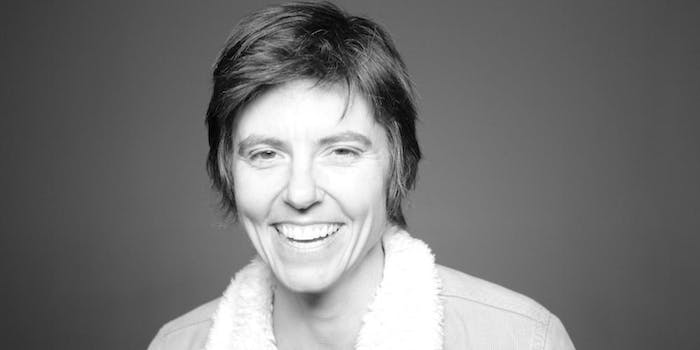 As Fun Fun Fun Fest grows, so does its sense of humor

In 2013, I watched Bridget Everett drink booze from a paper bag and motorboat a man.

In 2013, I watched Bridget Everett drink booze from a paper bag, motorboat a man, and lower herself onto an audience member’s face at Fun Fun Fun Fest. I’d never heard of her before that day, but I was nonetheless drawn into the tent where she was performing, first by her voice and then by the awe-inspiring mechanics of her body. The audience member next to me breathlessly read my mind:

This is the response one hopes for in the comedy tent at Fun Fun Fun Fest. Since comedy started being a featured part of the annual Austin festival in 2009, it’s seen headliners like Sarah Silverman, Fred Armisen, Patton Oswalt, and David Cross, as well as lesser-known acts that fall in line with the fest’s cool-nerd vibe.

“In 2009, we decided to add a fourth stage for more stripped-down artists,” said Graham Williams, one of Fun Fun Fun Fest’s founders. “Quieter acts: comedy, spoken word, poets, video, acoustic music. Basically, acts that needed a more intimate setting and felt a little weird on a giant stage at a festival in between sets of two loud bands. We’ve stuck with that model, for the most part, and our Yellow stage has hosted a lot of different acts, but mostly comedy.”

As the festival celebrates its 10th year, Fun Fun Fun Fest’s Yellow stage is headlined by Tig Notaro, who’s seen both a Netflix documentary and an HBO standup special this year. But the fest has also become a place where you can walk into the tent and see a comedian you don’t know or an unconventional performance, like this year’s discussion by Wu-Tang Clan’s GZA on the “science of hip-hop.” And there’s the always-popular Air Sex Championship.

“When it comes to national comedy, we tend to bring down comics that we feel really match the vibe of the festival,” Williams said. “Progressive, smart comedians that are in line with our bands in some ways.”

The comedy stage this year is sponsored by JASH, the online network devoted to original comedy content. Fun Fun Fun Fest has always embraced the Internet to keep fans engaged year-round (Bill Nye further illustrated that this year) and seek feedback: This year, when the band Desaparecidos dropped out, the fest asked fans for alternative suggestions for fill-in bands on its social media accounts. Fun Fun Fun Fest comedy booker Chris Trew of Austin/New Orleans theatre the New Movement says a comedian’s Web presence is integral to exposure but not essential to landing on the lineup.

“It’s essential in that it can increase the likelihood of someone being a part of the festival,” Trew said, “but we have acts every year that will really shine bright on the Yellow stage that don’t necessarily have a killer Web presence.”

Rather, comedians’ presence and command on stage is crucial. Comedy doesn’t always translate at a music-heavy fest, and in past years, the Yellow stage has often been overtaken by waves of feedback or sound-bleed from other stages, with fans straining to hear jokes above the din.

“We’re looking for acts that will embrace the environment,” Trew said. “Everyone wants to see their show listed on the poster for an outdoor music festival, but not everyone is willing to truly embrace the elements. There will be bands playing at the same time as you, there will be planes flying overhead… We want to book shows and people that can handle those things and not be so eager to abandon their material because they are out of their comfort zone.”

“We try to book shows and people that can adjust, grow, and meld with a taco cannon and the bass drum coming from all sides,” added Lisa Friedrich, another FFFF comedy booker from the New Movement. “The energy has to be higher, which I think some performers aren’t ready for.”

The comedy festival as a standalone event has exploded in popularity: Austin’s yearly Moontower Comedy could be seen a companion piece to FFFF. Funny or Die’s Oddball Comedy & Curiosity Festival has become a massive touring enterprise. FFFF 2015 performer Eugene Mirman even started his own comedy festival. “Every comedy scene needs a flagship event or two to act as ‘trophies’ to reach for,” Trew said.

Both Friedrich and Trew have watched the comedy portion evolve as the fest—and Austin’s ever-growing comedy scene—has too; FFFF is as much a channel into Austin’s comedy scene as it is about mainstream acts. And the fanbase has grown, too: Friedrich adds that “By Sunday, I usually see a couple of people who have been there the whole weekend and have just decided the Yellow tent is their home base.”

A handful of local acts this year are New Movement-related performers, which could narrow the focus a bit in a comedy scene as vast as Austin’s. Is there a concern that there’s not enough representation? Trew says they’re “always open to non-TNM programming” that fits the stage.

“It’s important to us that we highlight as much [of] Austin as we can while also delivering on our goal to have the most dynamic comedy programming at an outdoor festival.” he said. “That’s why there’s shows like Air Sex, Live Action Battle Rap, and ATX Comedy Hour that are TNM shows, but featuring talent from all over the city.”

This year, the Yellow stage is also hosting NASA scientist Dr. Scott Bolton, the more free-form comedy of Eric Andre, 10-year-old Internet-famous comic Saffron Herndon, rapper Lil Freckles, and Austin comedy cabals like Bad Example and Greetings From Queer Mountain. There’s still an effort to draw you in to ask “Who is this?”

“Standup is absolutely the most logical form of mainstream comedy to put up at the festival, and we want to do that too,” Trew said. “We just want to maintain that experimental vibe at all times as well.”