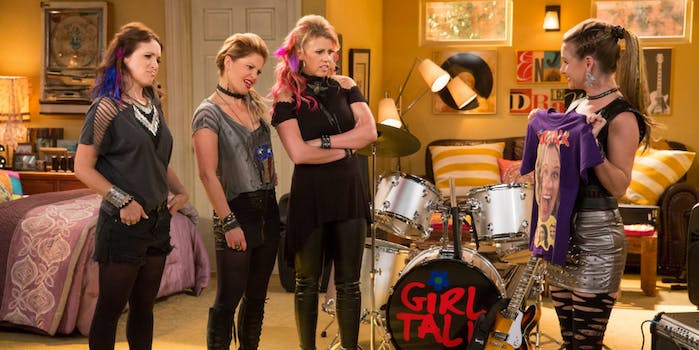 ‘Fuller House’ is best when it focuses on the women

Who's watching this show?

In February, when season 1 was released, we called Netflix‘s Fuller House a nostalgia-laced pukefest. Yes, harsh. But some of us had hope that its inexplicable second season would actually break free from a prison of winking callbacks and nostalgia.

It tries, but then the New Kids on the Block show up. Season 2 continues with some tedious storylines, like D.J. Tanner having to choose between two equally boring men, Matt and Steve. But the three dads of the original are now the “three moms” of Fuller House: D.J., Stephanie, and Kimmy. We see them confide in each other about work and kids, and the show works best when they’re interacting in the present and not obsessing over men to drive plot. They (re)start band Girl Talk, but even that’s a callback to the original series, complete with a cameo from bad influence Gia.

The show also continues to call out the Olsen twins, which is an empty gesture at this point. Elsewhere, Alan Thicke shows up as D.J.’s blind date, which is weird, though they have at least one exchange where it’s implied this is weird because he’s the dad from Growing Pains. (Does this mean we’re going to get an extended ‘90s sitcom universe now?)

What is Fuller House about, and who is it for? I really wish Netflix released viewer data because I’m lost on who’s actually watching it, and I’m not alone. The revival thread is still strong, as the release of Gilmore Girls: A Year in the Life (and success of Girl Meets World) proves. But Fuller House needs some original ideas.