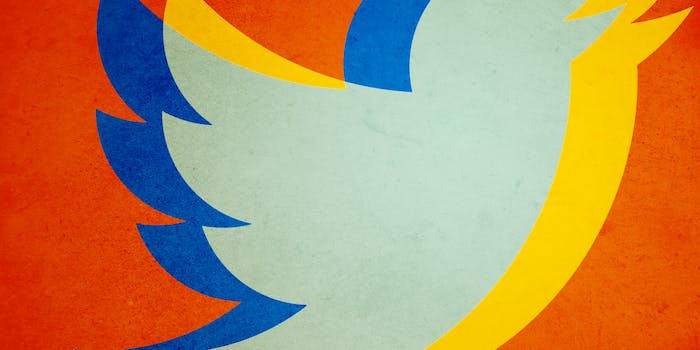 Despite what Christopher Hitchens says, ladies can be funny too. Crazy, right?

In fact I follow a lot of funny women on Twitter who should have more followers than they do. Here are some Daily Dot selects—hilarious women with (seemingly) great politics who have less than 15,000 followers. Enjoy, follow, fave, retweet, do you.

Who: Grace Spelman is a staff writer for BuzzFeed.

Sample line: “I’ve started talking to my plants AKA I’m turning into the quirky aunt I always knew I’d be”

I made a collage of the Animorphs mid-morph bc I was crying laughing @ the book covers this morning. Here they are pic.twitter.com/is7wmkyarC

— addicted to deleting my own tweets (@GraceSpelman) February 7, 2015

It's only 8:30 but I already know that reading this headline is the best thing that happened to me today pic.twitter.com/ojzjodWTO0

no but now I kind of want to pic.twitter.com/97W4xsPNbl

— addicted to deleting my own tweets (@GraceSpelman) December 2, 2014

— addicted to deleting my own tweets (@GraceSpelman) December 14, 2014

Sample line: “can you imagine having to send dick pics via carrier pigeons like they had to do in victorian times your dick pic just flapping in the wind”

Who: Brooklyn-based comedian and writer.

Sample line: “What if there were furries during Shakespeare’s time?”

Y'all are mad at baby grande but you don't know what that donut tasted like. Maybe it was so bad it made her hate America. #blamethedonut

Landed in San Diego. Have heard Rob Thomas and Ja Rule and am quietly wondering if I've traveled through time…

Can I get ASMR from the incredibly loud bass in my neighbor's Fetty Wap playlist?

Who: Los Angeles-based writer and artist.

Sample line: “if capitalism is the enemy, i guess im like rlly into keep your friends close and your enemies closer”

in the future there is no religion, no politics only clans organized around which thinkpiece u hate least

Sample line: “Today my therapist told me to stop hating all men because ‘all human beings suffer’ and I was like ‘nah fam'”

Men have a lot to refuse to learn

ATTENTION FELLOW WOMEN: IT IS VERY EASY TO GET A THIGH GAP IF YOU WANT ONE. JUST WALK WITH YOUR LEGS REALLY FAR APART

Looking For: Ridiculously hot kept man who has very low monetary standards for a sugar mama.

Who: Co-founder of Lady Parts magazine.

someone just said to me "let me drink a beer before you keep talking."

overheard someone bragging about their "super deep pussy" but how deep can it really be?

Who: Multi-media artist and writer.

Sample line: “nothing tastes as good as praise from random strangers on the internet feels”

Who: Standup comedian, field producer for the Daily Show.

Sample line: “What if the whole entertainment industry knew Bill Cosby was a serial rapist in the 70s, 80s & 90s but pretended that they didn’t until now?”

Who: Artistic director of the Upright Citizens Brigade Theatre in New York City and can be seen on the Chris Gethard Show, Broad City, and Man Seeking Woman.

Sample line: “I’ve seen Sharknado, but not Sharknado 2, will I understand Sharknado 3?”

I just pre-ordered Fight Club 2. It doesn't come out until May, 2016. This is very important information about me, who I am etc etc.

I love getting my period. It is my favorite thing in the world. NATURES BEST IDEA.

RT if you are awake and chill as fuck.

Who: Writer for Veep.

Sample line: “you think ‘you can’t turn a ho into a housewife’ but i thought you can’t make a human man out of garbage and yet here you are”

she wears short skirts
i wear t-shirts
she's cheer captain and
i'm going to steal the declaration of independence pic.twitter.com/nUBsAoaqZ4

Who: Rocha puts on a monthly scrappy show, Treat Yourself, and programs for the Strong Female Lead film series. You can watch her sketches here.

anthony bourdain just said "specialty weiner" I'LL SHOW MYSELF OUT, THANK YOU. YOU HAVE A LOVELY HOME.

"Come with me if you want to live." Jk, just going to trader joes

omg what does it mean when u smell olive oil?

Who: The brains behind the wildly hilarious Twitter accounts @GuyInYourMFA and @DystopianYA.

Sample line: “Tweeting about losing followers is like when a standup makes a joke about how badly he’s bombing. it just makes everyone uncomfortable”

[running out of fashion capitals to take the model contestants to] TYRA: you girls are going…. to AKRON!!!!!!!!

When you're feeding lambs but still feeling your look. pic.twitter.com/oeU2o3WgIB

Who: Alicia Eler is a queer writer who edits ART21 magazine, contributes to the Guardian and Hyperallergic, and splits her time between Los Angeles and New York City.

Sample line: “Affective labor is the way to my heart. I desire your production”

#Tinder?! I barely even know her!

"The fine line between Los Angeles mystic and Portland hippie"

Who: The founder of mental health nonprofit, Project UR OK.

Sample line: “Can you imagine if they made poopless dogs? How popular would dogs be then??”

This yogurt is my spirit Dannimal.

"Everything turns into a BIT, my GOD" -the NSA reading my text messages

Who: Nicole is an actor and teacher at the UCB Theatre.