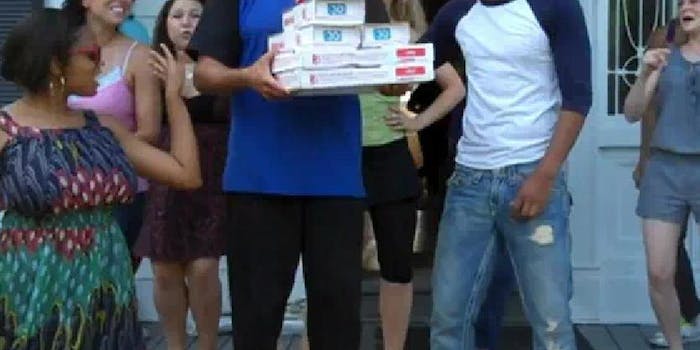 The story behind the best Domino’s flashmob ever

In July 2010, a Domino’s Pizza delivery man got more than he bargained for when delivered some pizzas to a house in Long Island.

At the front door, the delivery man was flashmobbed by American Idol contestant Todrick Hall and about 12 other cast members of the musical production Hairspray, who sang an original Domino’s-inspired showtune.

“I called 1-800 Domino’s and it was not too long ago
Cuz I know, no one gets to my door so quick, no one makes better cinna-stix
I tried them other Joe’s but the flavor was just so-so, but I know
Domino’s makes my taste buds sing, Domino’s has the best hot wings”

The whole scene was caught on video and has since collected more than one million YouTube views, including 282,000 more Thursday, when it was re-posted to WorldStarHipHop.

“I was doing a show for six weeks in Long Island and the cast all lived in that big white house,” Hall told the Daily Dot.

“I typed up the lyrics and slipped them under everyone’s door. Then I said meet me at this time, we’ll teach it to you, order the pizza, stage it and have people on the lookout to tell us when the pizza car was rounding the corner. This was the most difficult of the flash mobs I’ve done because we just had to sit and wait for him to show up, but it just made it all that much more fun.”

Hall staged the flash mob shortly after season nine of American Idol, where he was voted off on March 11, along with singer Adam Lambert.

The video was a hit on YouTube, collecting more than 2,900 comments. It also got some love from Domino’s.

“It was played at the Domino’s convention in [Las] Vegas in front of over 7,000 Domino’s employees, and it has also been featured on a couple of television programs in Japan,” Hall said. “I have tons of videos on youtube, but I always tell people that this is my best one. I love the concept from beginning to end, and I thought that the song was more catchy.”

On YouTube, Hall simply named the video “Todrick Does Domino’s.” But WorldStarHipHop retitled it “Ways To Get Out Of Paying For Your Pizza!” That inspired some Twitter users to try and do the same thing to avoid paying a tab. But while WorldStarHipHop’s title may have been funny, it wasn’t true, Hall said.

“I know that it might make me lose some of my ‘street cred’ to say this, but yes, we did pay for the pizza. The man didn’t speak a lick of english, but somehow he let us know that it truly made his day. He took pictures with us and his family and friends left comments soon after the video was uploaded.”

Hall has just released a new single on iTunes called “It Gets Better.” Yet, despite all his success, the Domino’s flashmob still has a special place in his heart.

“I’m thrilled that almost two years later people are catching wind of this. It’s always been my little diamond in the rough,” Hall said. “Thank you to everyone who has liked, shared and featured this video on their websites and facebook pages. It makes my day to know that people all over the world are escaping their daily lives, even if just for two minutes, to come on quirky YouTube journeys with me.”