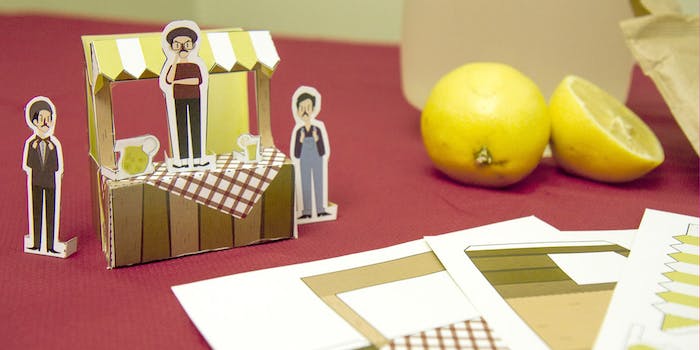 These YouTubers are earning cash the old-fashioned way—with a twist.

The Tin Can Brothers, a sketch comedy trio made up of Joey Richter, Brian Rosenthal, and Corey Lubowich, got their start as part of YouTube sensation Team StarKid, with Richter and Rosenthal on stage and Lubowich working behind the scenes. They’ve turned their talents to YouTube sketch comedy in recent months, producing weekly videos that joke about what it’s like to have a rich best friend and the joy of realizing your favorite TV show is back for a new season.

But creating consistently funny videos doesn’t come cheap, and so as the summer came to a close, they decided to take an iconic summertime act and give it a little digital reinvention with the help of Kickstarter. And lo, the digital lemonade stand was born.

“Selling lemonade is a classic way that children make money during the summer months,” Richter explained. “And since it’s no longer summer and we are definitely not children, we thought it would be the perfect fundraiser. But then we realized three grown men standing on a street selling cold beverages might rub people the wrong way. So we decided to take the online market and leave the neighborhood corners for the kids.”

The group set their goal at $25, a respectable amount for a street corner stand, but they have easily surpassed it, bringing to mind other small-goal projects like the infamous potato salad Kickstarter from earlier this year. While that had a variety of levels of potato-backing, the Tin Can Brothers are more focused, offering limited rewards that won’t stretch their earnings like other Kickstarters might. For a $10 pledge, backers get a packet of Tin Can Brothers lemonade and a personal pop-up stand with paper doll cut outs of each troupe member. For $25, you also get a T-shirt, but that’s as fancy as these rewards get. With a targeted approach, they’ve raised over $3,580 so far, which Lubowich says they’ll spend on producing future videos as well as mounting their first-ever West Coast live show this fall.

“In YouTube’s ad-supported ecosystem, it’s hard to generate substantial revenue directly from narrative content without millions and millions of views,” he said. “This Kickstarter is going to help us pay actors, buy props, rent a theater, and a whole slew of other costs which we otherwise wouldn’t have the means to cover.”

While they’re happy with their earning so far, Rosenthal joked that they’re “still unrealistically holding onto the dream of making $1 million.”

“A lot of the contributions have been made by current TCB fans, but we think there are a few hardcore lovers of lemonade out there who have yet to contribute,” he said.

Photo courtesy of the Tin Can Brothers