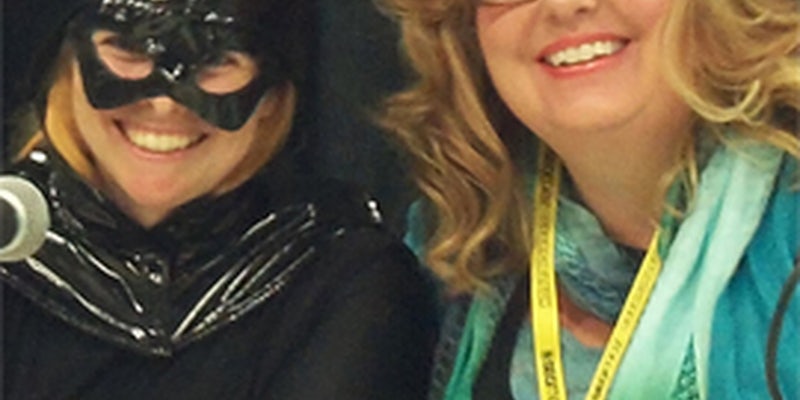 After denying rumors last week that she walked off DC’s flagship Batgirl revival project, where she was hailed as one of the comic’s most innovative and important writers, beloved writer and feminist Gail Simone revealed the truth Sunday: She was kicked off the project last Wednesday via email.

“It is baffling and sad,” she added.

This isn’t just a routine firing or reshuffling of resources. The success of the new Batgirl spoke to the desire of comic fans to support well-done revivals as well as change within an industry where sexism is deeply entrenched. As Tim Hanley noted, “of the 14 issues of Batgirl released so far, only ONE has sold less than DOUBLE what the previous series ended on…Almost all of this can be attributed to Gail Simone.” Popular comics Tumblr dcwomenkickingass laid it out:

So in the bizarro world that is DC Comics:

Simone came to fame when she launched the groundbreaking website Women in Refrigerators in the late ‘90s. A simple and damning litany of female comics characters who had been tortured, raped, and murdered, most solely for the sake of providing more angst for male superheroes, “fridged women” became a cultural shorthand to refer to misogyny in comics, gaming, and other facets of geek culture. And Simone herself became an icon noted for her vocal stance on the need for greater gender equality.

One female superhero who wasn’t fridged, but who couldn’t quite escape the cape unharmed, is  Batgirl Barbara Gordon. In 1988, a comic by Alan Moore of Watchmen fame saw Gordon (the commissioner’s daughter) left with spinal paralysis after being shot by the Joker. In her new role as one of DC’s few active disabled characters, she evolved into Oracle, a brilliant computer hacker and security expert who many fans felt had more power in a wheelchair than she ever had behind a cowl.

When DC announced it was rehabilitating Barbara Gordon and returning her to the role of Batgirl as part of the massive “New 52” reboot of the DC Universe, many fans had concerns about erasing Oracle’s disabled identity. DC largely allayed such fears with the subsequent announcement that Simone would be writing the new series.

Simone was “the sole reason a lot of readers even picked up the New 52 in the first place,” The Mary Sue’s Jill Pantozzi pointed out.

Simone is not only one of the comics industry’s few notable female power players, but an outspoken critic of misogyny and erasure of women and other minorities in comics. DC has opened itself up to ongoing criticism in the past due to both its notable lack of female writers and artists and the infamous Batgirl incident at last year’s San Diego Comic Con, in which cosplayer Kyrax2 (shown above with Simone), challenged DC on its lack of gender diversity at several panels.

When a male audience member questioned DC publisher Dan Didio about why the already extreme gender gap at DC had widened from 12 percent female writers to 1 percent, Didio responded with hostility, “Who should we be hiring? Tell me right now.” (Audio clip, via kyrax2.)  Later, when Kyrax asked the New 52 panel if they were committed to hiring more women, Didio and other panelists refused to provide a straight answer.

After the incident, Kyrax spoke to Simone, who reportedly told her that DC would be hiring more women in the “second wave” of new comics.

Now, not only has Simone been fired for what many suspect are her own outspoken views on DC’s issues with gender diversity, but she leaves behind only two female writers working on ongoing series: Anne Nocenti and Christy Marx.

The news comes just days after one of DC’s other few women of power, Karen Berger, announced her departure. Berger stood at the head of edgy DC imprint Vertigo during its golden era of acclaimed and groundbreaking output like Sandman and Y: The Last Man. With Berger and Simone both gone, DC will have few, if any, women occupying prominent roles within the company.

Meanwhile, Simone has launched a successful Kickstarter project, Leaving Megalopolis, and Marvel artists are wooing her. Though others in the industry were outraged, Simone remained positive, stating on her Tumblr that although, “I feel a genuine sense of loss. This wasn’t just another assignment to me,” she also feels “very, very fortunate” to have worked on Batgirl at all.

DC can only hope Batgirl fans continue to feel likewise. The company has yet to comment on Simone’s firing.

UPDATE: Simone wrote, via Twitter, “Have also have heard from the higher ups at DC and they have been very kind and have made it clear that things went awry and want other projects from me. So it is going to be a very different year, but things are going to work out, I am convinced. New challenges.”