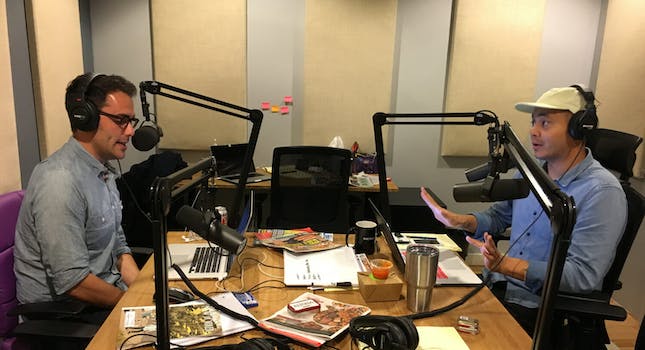 Photo via The Daily Zeitgeist

HowStuffWorks’ podcast version of ‘The Daily Show’ attacks the news

'The Daily Zeitgeist' has all the right Stuff.

In 1997 you’d wake up and grab breakfast with a newspaper. In 2017 you check Facebook. But for millions of Americans with a long commute or no cable, podcasts are already the next wave.

In February the New York Times launched The Daily, a podcast that recounts the previous day’s news. In about six months, estimates put the show at 750,000 daily downloads, and rising. NPR launched Up First in April, which is a similar show from a public institution, and it’s already bigger than NYT‘s. A quick look at the Apple Podcast app and you’ll see trending news series from media arms like Fox, the Outline, and the Wall Street Journal.

There’s a huge audience for a media organization casually dissecting the day’s headlines for their listeners, rather than a “voice of God” reporting show, which is why it’s exciting to see this approach from podcast behemoth HowStuffWorks—with a comedic twist.

On Monday former Cracked.com co-founder Jack O’Brien is launching the Daily Zeitgeist podcast via HowStuffWorks. It’s the first high-profile attempt at a comedic take on a daily news podcast: It’s The Daily Show, for audio.

He’ll be joined behind the mic by Miles Gray, an Upright Citizens Brigade-trained comedian who’s produced, written, and directed work for companies like YouTube, Playboy, and Conde Nast. He’s also a former lobbyist, so his political bonafides are top notch.

“And also he knows all the words to ‘Bodak Yellow,’ and he did before it was a hit, which is pretty cool,” O’Brien tells the Daily Dot.

O’Brien also says that Gray was one of 13 comedians considered for the role of co-host. “As much as I love him, he wouldn’t have the job if he wasn’t a super talented comedian,” he adds.

The audience may exist for the show, but what is the point?

“It was just an exciting opportunity to at least take a good view of the news and give it an angle, rather than being outraged at whatever the president is tweeting or how he’s been behaving, and giving people some context but also being able to laugh,” says Gray. “It’s almost like a woke morning show.”

BuzzFeed last week launched a new kind of woke morning show called AM to DM that runs exclusively on Twitter. The show, one week in, is already claiming 1 million viewers a day. The wave is cresting.

Every day O’Brien and Gray will fill an empty studio seat with a third comedian. “We’re both comedy nerds and we feel like that’s going to be an opportunity also to discover talent and find people who have a real rapport with our audience,” O’Brien says. “And possibly develop other shows off of that third seat on the panel.”

O’Brien was hired away from Cracked in June to lead HowStuffWorks’ West Coast operations in Los Angeles, and was tasked with its expansion into comedy. The hire came on the heels of HowStuffWorks hiring Will Pearson and Mangesh Hattikudur from Mental Floss in spring to helm the Part-Time Genius podcast and help in the development of others. It was quickly followed by an announcement that the content giant had raised $15 million in a fundraising round.

The new show has a writing team that includes members from the show Adam Ruins Everything and Cracked. They talk through the day’s news every afternoon via Google Docs.

“We’re not interested in just rehashing the news cycle and bringing you the same info as everyone else with just a dick joke added here and there,” says O’Brien. “We’re looking to also bring you really interesting ideas that people may bring up in a dinner party conversation.”

I haven’t listened to The Daily Zeitgeist yet, but I’ve heard a number of teaser clips, and I have high hopes. The hosts are funny, and they’re thinking bigger than easy yucks.

“We’re not interested in just putting out a show that is comedy for comedy sake,” says O’Brien. “I think we’re always going to want there to be some kind of takeaway that goes along with the genuine laughs.”

The show is focused as much on daily news as it is on culture. In one clip about the NFL’s recent protests O’Brien brings up a Black quarterback support group (that actually exists) and “that probably has something to do with why a Black quarterback kneeling during the national anthem has turned into the biggest tragedy in the history of these people’s lives.”

HowStuffWorks is the proud owner of a small mountain of cash, a successful slate of shows with more arriving all the time, proven media talent from all corners of the world, and, it says, 1 billion podcast downloads since 2012, with more than 35 percent of those downloads coming in the last 12 months—and 37 million downloads in July alone.

A show offering five episodes a week as opposed to the traditional weekly model, with advertisements, can only help those numbers.