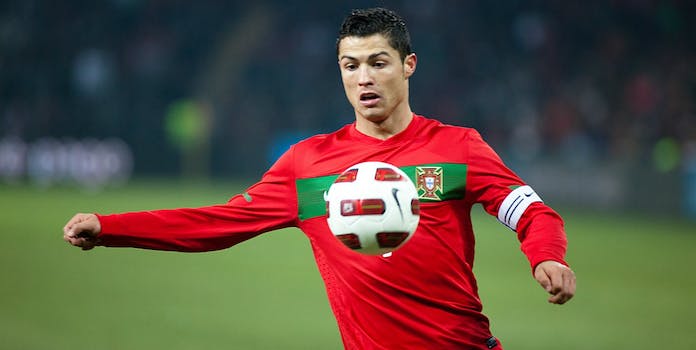 He joins Justin Bieber and Taylor Swift in the exclusive club.

In our American bubble, sports fans can look at the social media followings of NBA star LeBron James or former NBA maestro Michael Jordan or NFL washout Tim Tebow and believe they represent worldwide recognition. After all, James boasts 28 million Twitter followers, Jordan counts 26 million Facebook Likes,  and Tebow, despite the fact he hasn’t played in an NFL game since 2012, remains one of the most popular quarterbacks.

In truth, though, all of their social media followings are dwarfed in comparison to a real international superstar. Cristiano Ronaldo is a forward for Real Madrid and has been one of the best soccer players in the world for the past decade, and as noted by Hookit—which measures and values “the total sports ecosystem on social and digital media”—he’s the first athlete ever to top the 200-million social media followers list.

More specifically, Ronaldo has 109.7 million Facebook Likes, 49.6 million Instagram followers, and 40.7 million Twitter followers. As to how that relates to American sports stars, Ronaldo’s total is three times more than the entirety of Major League Baseball, and his numbers outweigh 99 percent of NFL athletes combined.

According to Hookit, Ronaldo averages about 135,000 new followers per day, and for 2015 overall, nearly 42 million people followed with about 75 percent of them coming from Instagram.

The only other people to top the 200 million social media mark are pop stars Justin Bieber and Taylor Swift. As for how Ronaldo’s online popularity ranks against the likes of James and Jordan.