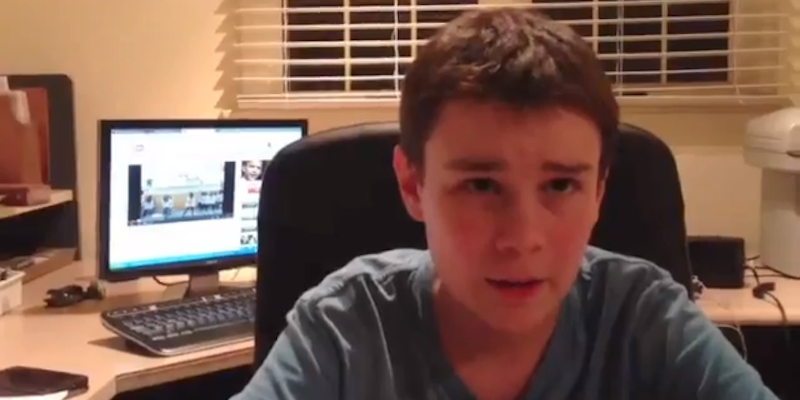 Connor McKenna wants to make sure his gubernatorial candidate dad is too busy running for office to embarrass him again.

The child of one politician is starting his own fundraising campaign—to stop his parents from embarrassing him and his siblings ever again.

Washington State Republican gubernatorial candidate Rob McKenna and his wife Marilyn made headlines last week for dancing along to PSY’s “Gangnam Style” during a global Korean Day event in Seattle.

However, their 12-year-old son, Connor, can’t watch the video for its entertainment value. He’s too worried about the shame and embarrassment that will be brought to him and his siblings because of a video of his parents dancing on YouTube.

Connor’s attempt to bribe his mother with $10 to never dance in public again had no effect, so he decided to go to YouTube to appeal to anyone who has been a kid who has been embarrassed by their parents.

“I feel the only way to make this madness stop is to pay my parents to never dance in public ever again,” Connor said.

Connor provides a link for you to donate to his cause by donating to his father’s campaign website. While he doesn’t think his father would do so well on So You Think You Can Dance, he does feel he’d make a good governor.

According to the News Tribune’s Peter Callaghan, constituents received a similar message from Connor over the weekend to take advantage of the buzz from Rob and Marilyn’s viral video. He called the McKennas appearing in a spontaneous dance the modern equivalent of baby kissing.

Many have gotten a good laugh out of Connor’s plea and have even called embarrassing teenagers part of a parent’s job.

“I’ll admit the kid’s got a point,” Marilyn tweeted. “Still, @robmckenna and I just have too much fun embarrassing them!”