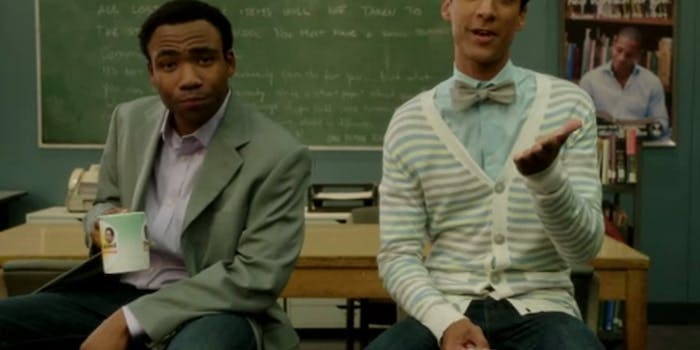 Community isn’t premiering tonight, but Joel McHale hopes to curb your appetite with a special episode of “Troy and Abed in the Morning.”

The two-minute YouTube video mocks NBC’s decision to cancel the show’s original season four premiere date, Oct. 19. Filled with rapid-fire dialogue, meta jokes about the show’s terrible ratings, and a full cast, it’s exactly how you expected the cast of Community to react.

“But even though the powers that be agreed to put the premiere on October 19, they couldn’t decide where to put October 19,” mused Abed (Danny Pudi). “It just isn’t a date, it’s a state of mind.”

The video basically slaps NBC ever so slightly in the face for how often it jostles the show around on it’s schedule, so it’s amusing NBC posted it from its own YouTube account.

“They explained to us that October 19 is a feeling within us all,” said Abed. “Whenever a kitten crawls into a cardboard box on YouTube…”

Although no one except for the powers that be at NBC knows when the show will actually return, this video is a temporary fix for Community-craving fans.

We’ll be counting down the days to Oct. 19, whenever that is.