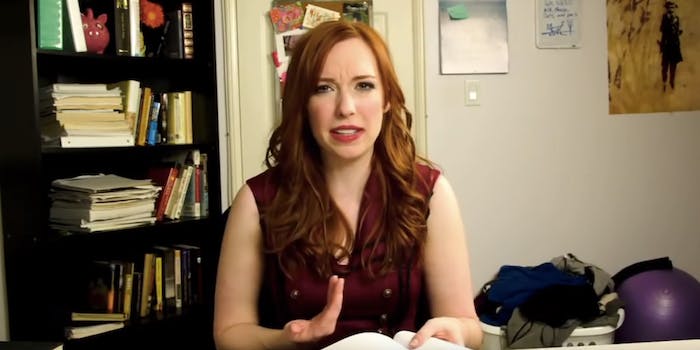 Classic Alice fans can put down the notepad—their favorite transmedia story is getting an upcoming app to help ease the burden for keeping up with its sprawling universe.

The series follows a college student who lives her life according to classic novels, played out through vlog-style videos, various social media sites, and a podcast series. Transmedia—storytelling thrown at users across varying mediums—continues to evolve but often it’s difficult for new viewers to engage wholly in the narrative experience.

“It’s hard to catch up because there’s this huge enormous train that sort of barrels through,”  Classic Alice‘s creator and star Kate Hackett told the Daily Dot. “It almost feels like we lose people because [they’re] overwhelmed by it. Giving it to them in one place is great. Directing your audience to six different websites, good luck.”

Enter the Horizon Factory, co-founded by Jay Bushman, the Emmy-winning transmedia producer of The Lizzie Bennet Diaries. It’s developing an app in conjunction with Classic Alice that will streamline the transmedia experience of shows in an easy-to-use mobile or tablet format.

“Every single thing that’s ever happened on the show or around the show, absolutely everything we have will be on this app,” said Hackett. “You can start from the very beginning, you can trace your way through the entire story.”

The series is subdivided into books, and Hackett said she envisions the first book being a free option on the app, with additional books as in-app purchases. They’re focused on getting the backlog of content up first, and catching up to the story in progress in time for the holiday season.

“Between Thanksgiving and Christmas we can do the whole bundle, so people can buy it as a gift,” Hackett said.