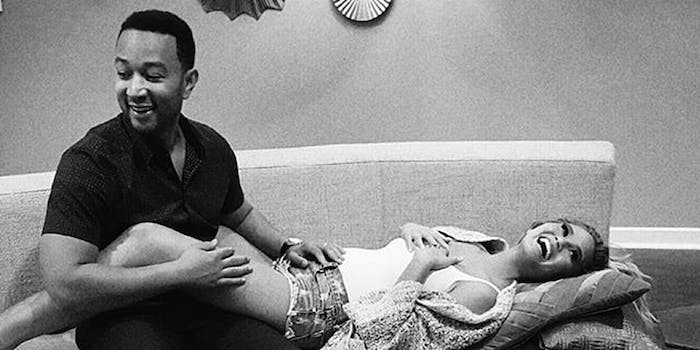 They're both absolutely thrilled by the news.

Chrissy Teigen is pregnant with her first child, so she and her husband John Legend announced it in a very modern way: on Instagram.

The couple, who are currently producing a pilot at ABC based on their relationship, shared the happy news on Monday night. As Teigen explained, becoming pregnant wasn’t an easy thing for them, but they’re absolutely thrilled that it’s finally happening.

“As many of you know, we’ve been trying to have a baby for a while now,” Teigen wrote. “It hasn’t been easy, but we kept trying because we can’t wait to bring our first child into the world and grow our family.”

John and I are so happy to announce that we are pregnant :) As many of you know, we've been trying to have a baby for a while now. It hasn't been easy, but we kept trying because we can't wait to bring our first child into the world and grow our family. We're so excited that it's finally happening. Thank you for all your love and well wishes. I look forward to all the belly touching! Xx

Teigen has been open about the difficulties she and Legend have had conceiving in the past. Just a few weeks ago, she and Tyra Banks discussed it on FABLife. Having struggled conceiving herself, Teigen said she couldn’t imagine asking other couples when they were having children, as some people have done to her. She acknowledged that she had no idea what they could be going through.

“I would say, honestly, John and I were having trouble,” Teigen told her fellow co-hosts. “We would have had kids five, six years ago if it had happened, but my gosh, it’s been a process. We’ve seen fertility doctors, and then once you open up about all those things to other people you start learning that a lot of other people in your life are seeing these people and they have this shame about it.”