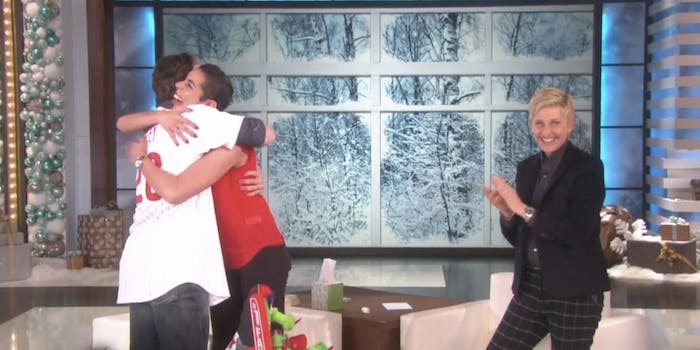 The Philadelphia Phillies may have had a lousy season, but one of their stars made a loyal fan’s day when he surprised her on The Ellen DeGeneres Show.

Kramer received some decent swag in the form of a $10,000 check from Target to cover her mounting medical bills, but the “get out of her seat and scream” moment came when Phillies second baseman Chase Utley walked onto the set to honor the courageous young woman.

Utley had some cool gifts for Kramer, like a Phillie Fanatic doll, but perhaps the ultimate treat was the news that she would be his special guest at any or all of the Phillies games for the 2015 season.

How did this come together? Kramer’s friends had heard that Ellen DeGeneres was looking for inspiring women to be guests on her daytime talk show. They started the #JulieMeetsEllen hashtag, which gained a lot of social media attention and landed Kramer an appearance on Ellen’s couch.

Utley’s appearance touched not only those who knew Julie but also Phillies fans and those whose lives have been touched by cancer.

I don't know her, but I'm not giving up yet. theellenshow you gotta read this girl. #juliemeetsellen ✨ http://t.co/UBUUTVR7ux

You did good, Utley. You did real good.