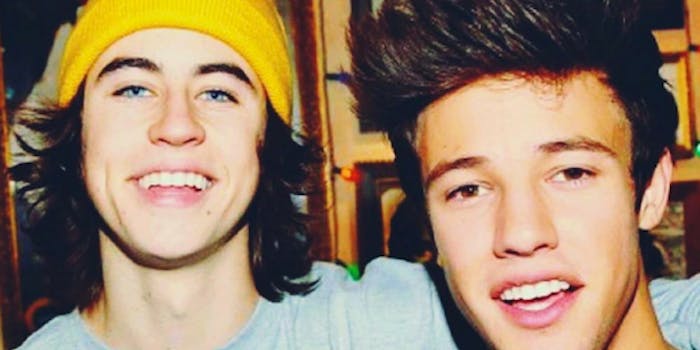 Cameron Dallas and Nash Grier livetweet their movie, it shoots up to No. 1 on iTunes

Their fans aren't messing around.

Vine stars Cameron Dallas and Nash Grier‘s new movie The Outfield has hit No. 1 on Apple’s drama chart a mere two days after being released. Considering they’re beating out Jurrasic World for the top spot, it’s no small feat.

The spike in popularity comes hot on the heels of Dallas livetweeting the film with the hashtag #TheOutfieldToNumberOne as he watched it Wednesday night.

While the intention of the livetweet was sincere, TechInsider pointed out that the tweets themselves were… less than riveting considering the 5.6 million-follower audience whose feeds Dallas was flooding.

But none of that matters to the boys’ legions of dedicated fans: In addition to Dallas’s 5.6 million Twitter followers, Grier has 5.1 million. The fandom has clearly taken #TheOutfieldToNumberOne to heart and is working hard to give the boys what they’re asking for.

The Outfield is still behind Amy Schumer‘s Trainwreck and Pixar’s Inside Out on the overall Apple movie charts, but if it ends up unseating them, the film’s official Twitter account is promising to give away autographed items from the set:

If we don't get #OutfieldToNumberOne then I'm stuck with all these autographed practice shirts & dirty baseballs. Gotta unlock the giveaway!