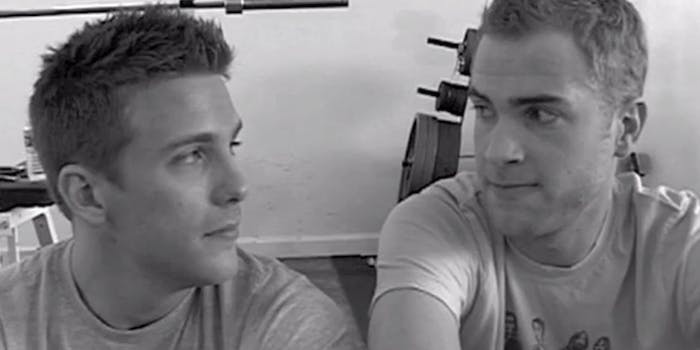 More than 2.7 million people have watched Shane Britney Crone cope with the loss of Tom Bridegroom, his partner and the love of his life.

They’ve watched him piece together the memories—the laughs, the trips they took. They’ve watched the ways in which Bridegroom’s socially conservative family has sworn the two off, alleging that they should seek medical attention for their sexuaility. They’ve watched Crone grieve in the days immediately following Bridegroom’s fateful fall off a Parisian rooftop in May 2011.

Posted to YouTube on May 6 “It Could Happen to You” details the story of two men in need of marriage equality. And soon, funding willing, they’ll be able to watch that story retold on the big screen, thanks to director Linda Bloodworth Thomason and the crowdfunding platform Kickstarter.

“It all began when I attended a gay wedding ceremony in Palm Springs, California,” the director explained on the campaign’s description page.

“That night, a couple of unforgettable young men named Shane and Tom joined my table. I learned they were ‘Designing Women’ fans, madly in love and literally brimming with all their big plans for an exciting life together. Sadly, that possibility ended when Tom was killed in an accident last year. When I heard the news, I was haunted by the sheer weight of Shane’s loss. Even though I barely knew them, their good-hearted demeanors and earnest love had made an indelible impression on me.”

She said that she saw Crone’s video a few weeks ago and was crushed over the fact that there’d been such a fallout “all because they were never allowed to marry.”

“I was deeply touched,” she wrote. “And angered. I called Shane [and] told him I wanted to make a documentary that would tell his and Tom’s love story from beginning to end.

“Like a lot of young people, they routinely documented their lives… it almost seems as though they had a premonition or unconscious fear of not getting to live out something important.”