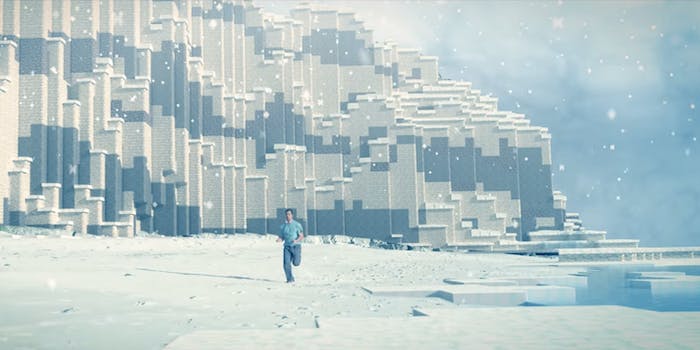 Inside the video effects studio of YouTube star Brandon Laatsch

The YouTube video effects star is breaking out on his own with a new webseries.

Brandon Laatsch’s hidden warehouse studio looks like an 8-year-old’s dream fort. There’s an enormous big screen, 16 computers, two couches, a pile of video games, and two bedrooms rented out by friends, and a miniature schnauzer named Bandit—not to mention a fake gun armory. The only thing missing is a “NO GIRLS ALLOWED” sign.

It’s an ideal work environment for a guy who built a career around his three childhood passions: setting things on fire, filmmaking, and video games.

Laatsch is best known as the cofounder of FreddieW, the popular visual effects YouTube channel that’s garnered critical acclaim and over one billion views to date. After four years together, Laatsch recently split from FreddieW in the pursuit of creating longer-form content. He’s now focusing the most ambitious project of his still-burgeoning career, a 12-episode show.

Laatsch’s interest in pyrotechnics was sparked early, first by behind-the-scenes DVD of Terminator 2, than in the garage with his father working on cars. His dad taught him how to make his first explosion with a soda can, tape, a cut power cord, and oxyacetylene, which all but sealed his fate.

While attending high school in Minnesota, Laatsch began collaborating with fellow aspiring filmmakers Sam Gorski and Niko Pueringer, the gentlemen now responsible for the popular YouTube channel Corridor Digital. Between his jobs as a long-distance trucker and tractor driver, Laatsch spent many late afternoons with Gorski and Pueringer perfecting the skills necessary to pursue action filmmaking.

“The approach was not, ‘How are we going to go schmooze with the right people and get to Hollywood and figure out how to get someone who was going to give us a budget.’ It was more learning how to do everything ourselves so we could form our own self-contained unit,” explains Laatsch, who cites directors Wong Kar-Wai, John Woo, and Stanley Kubrick as pivotal influences.

After high school, Laatsch moved to Los Angeles to pursue filmmaking at the University of Southern California.

“The whole goal of film pyrotechnics is you want to make it as showy and dangerous looking as possible, while making it as safe as possible,” says Laatsch. But that doesn’t mean he hasn’t had close calls. “I mean, I had some periods where I wouldn’t have arm hair for a little while. It’s nothing out of the ordinary to have a little shorter eyebrows.”

During his first week in the freshmen dorms, he met his future business partner Freddie Wong, who introduced him to YouTube. As with fellow filmmakers Wong Fu, the two recognized the potential of the video-sharing platform early, especially because it solved the issue of actually hosting content online.

Wong and Laatsch began sporadically putting out videos during college until they made the decision to pursue YouTube full-time. Every week since, the two made groundbreaking VFX shorts, many of which comically presented a different look at popular games such as “Future First Person Shooter,” “Rollercoaster Tycoons,” and “Medal of Honor Cat.” Together, the pair gained over 6.9 million subscribers and produced everything from shorts and podcasts to full-length webseries, most notably Video Game High School.

Halfway through college, Laatsch actually switched majors from filmmaking to sociology, a move that’s reflective of his overall approach to his craft. “I wanted to learn about people,” says Laatsch, who left USC two courses shy of completion. “I wanted to learn about the larger movement of society, and how groups of people interact and move. I figured that would help me more in terms of managing a set or crew, and as a storyteller in terms of just understanding how people work, how society kind of ticks.”

Those are skills Laatsch will certainly need as he looks to restart his work on his upcoming webseries. After creative differences with Mojang forced the filmmaker to prematurely cancel a Kickstarter campaign for a Minecraft-themed movie, Laatsch is now moving forward to create a show he loosely describes as a “modern Western.” The series will consist of 12, 30-minute episodes, but a release date has yet to be unveiled.

“It will be much more action-oriented and adult then my previous work on VGHS,” he said. “The fans of my style of shooting action YouTube videos will find a lot to enjoy in this series.”

Through it all, even as he’s running through explosives covered in blankets, Laatsch has kept matters in perspective.

Correction: Laatsch’s new project is not a show, not a webseries as originally reported. “I won’t be releasing my new project on YouTube as a first window,” he clarified. “Maybe down the road, but not right away.”