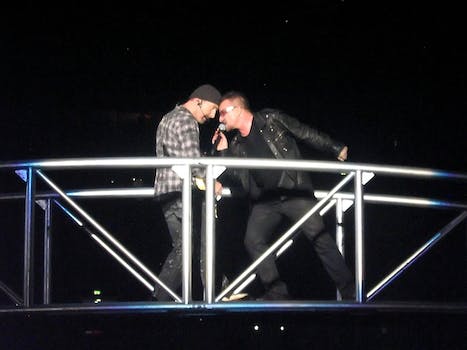 The U2 frontman expresses concern over his recovery and U2's tour later this year.

U2 frontman Bono revealed that his injuries might prevent him from playing the guitar again in a “too long” blog post reflecting back on the past year.

Titled “Little book of a big year: Bono’s A to Z of 2014,” Bono admits that his mind has wandered as of late ever since he suffered multiple injuries in a biking accident in November that forced him to cancel a series of appearances on The Tonight Show. He has no recollection of how he got to New York Presbyterian “with my humerus bone sticking through my leather jacket” and noted that he now has titanium elbow as a result of his surgeries.

Bono talks about his injuries specifically under the section “I is for Irish pride.” It was his Irish pride that was wounded when he was discovered wearing yellow and black Lycra cycling shorts following his accident, and it’s Irish pride that is suffering as his recovery isn’t going as quickly as he’d like. As he put it, he’s “not an armored vehicle.”

“Recovery has been more difficult than I thought,” Bono wrote. “As I write this, it is not clear that I will ever play guitar again. The band have reminded me that neither they nor Western civilization are depending on this.”

It wasn’t the first blow to Bono in 2014, either. Over the past year, he’s suffered from glaucoma, escaped death after a door fell off his plane, and felt the wrath of the Internet for giving them a free album on iTunes without their consent.

Bono’s injuries may end up putting a dent into U2’s tour, but not if Bono has anything to do with it. He announced that his blog post would be the last people would hear from him for months so he could focus on his recovery.

The consequences of this freak accident are significant enough that I will have to concentrate hard to be ready for the U2 tour in fitness terms… as a result I have cancelled every public appearance and decided this missive is all the communication I can manage for the first half of 2015, beyond muttering and singing to myself of course.