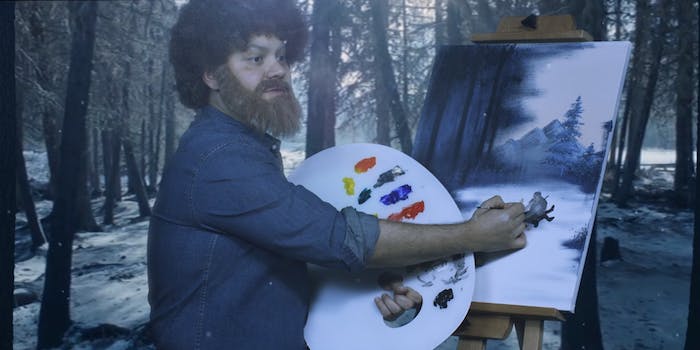 Even Bob Ross has trouble staying positive while painting ‘The Revenant’

This isn't what Ross is used to painting.

In 2015, Twitch.TV made the brilliant move in airing a “The Joy of Painting” marathon that explored all 403 episodes of the beloved series. It was that decision that introduced the legend of Bob Ross to a whole new audience.

Known for creating lush landscapes in a calm serene manner that could make anyone feel like they’re the next Pablo Picasso, it’s Ross’s personality and delivery that makes the series so admired and hypnotic.

In a new parody video from YouTube Channel “Above Average,” Ross is now tasked with capturing the visceral beauty of Alejandro González Iñárritu’s “The Revenant.”

Following the “happy little trappers” along, Ross soon finds himself in the middle of the carnage and maintains his composure with some “dark red” to paint that “angry little bear attack.” After all, this stuff … happens in nature.

From depicting the smothering of a little boy to the violence of an arrow through a guy’s throat, Ross is quickly thrown into a position where he has to “add a little blood” all over the place.

“And, I guess we’re murdering a horse now,” Ross says before covering the entire canvas in black. If fake Bob Ross can’t handle “The Revenant,” who can?