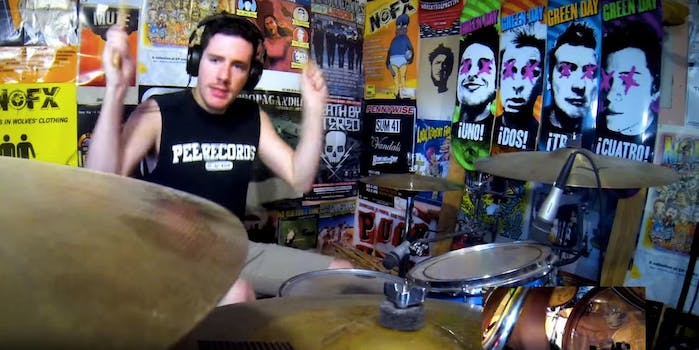 It’s no secret that 20th-century pop-punk masters Blink-182 turned a creative corner between Dude Ranch and Enema of the State. The band parted ways with drummer Scott Raynor and brought in human V8 engine Travis Barker to mete out the tempo. Barker’s caffeine-powered drumming fueled the teen-spirit mosh pits during which TRL’s misfits came of age in the late ’90s.

The underrated angle to Blink’s sonic footprint is how frenetic, addictive, and familiar these double-time drum parts are. They’ve aged well. Here’s proof.

YouTube’s punk-rocker drum hero Kye Smith, drummer for Newcastle-based pop-punk band Local Resident Failure, decided to learn the most distinctive drum patterns from every song on the last six Blink-182 albums and then play them back-to-back in one megamix. He skips fan-favorite demos like Buddha, taking us from 1995’s Cheshire Cat through 2011’s Neighborhoods*.

Since posting the clip on June 27, it has amassed more than 367,000 views on YouTube. Smith has also given the golden pop-punk treatment to NOFX, Rise Against, and Green Day.

You burn through the five-minute video, and all that was emotive and positive about the pop-punk heroes’ discography hits at once. Smith finds the tastiest foothills to swing his sticks on.

Hearing the isolated drum parts helped me compile a highly astute and unimpeachable power ranking of the best Blink-182 songs:

*Don’t worry, I perused the latest release, and if you have fond memories of Blink-182 from 10-plus years ago, this is an easily skippable endnote of a record.