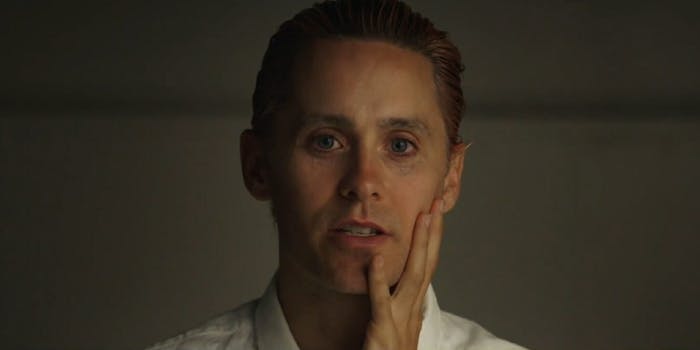 Jared Leto interviews Deepak Chopra about space, time, and the future of humanity

They're the perfect double act.

Why shouldn’t Jared Leto interview Deepak Chopra about space, time, and the future of humanity? They’re the perfect double act, each as ill-equipped as the other: one, an actor who barely finished high school, and the other, a New Age guru who became a millionaire telling people that we are all landlords to unsleeping, all-seeing wizards that live within each of us.

But this is what we get in the first episode of Beyond the Horizon, Leto’s series of 10 weekly interviews for AOL. And it’s actually quite terrific. Not because you’re going to get any answers to the insanely big questions with which Chopra is posed but because of the enjoyment in witnessing the earnestness and utter confidence that these two have in talking about things that they could not possibly know.

“You know what I’m really curious about?” starts Leto, pausing for effect. “The future.” It’s a great non-question that immediately allows Chopra to begin turfing out vast generalities about weapons, love, self-awareness, and extinction over a charmingly edited Baraka-esque sequence of Doomsday footage.

“What is God?” barks Leto, interrupting video of Ghandi and John Lennon. Cue a stream-of-consciousness ejaculation about coincidence, confluence, and how “we are all gods in different disguises, just like there is one electricity for all contraptions.”

It’s probably garbled nonsense, but it’s said in such a brilliant, unerring way that you’ll likely find yourself nodding. You may well be skeptical of Chopra’s advocacy in the past for, say, vibration treatment to trick the body’s cells into rejecting HIV, but here, backed up by a swelling soundtrack, you’ll be somehow convinced of his scientific chops; it’s no real problem to create a biosphere on a hostile planet or “non-locally transport people … like in Star Trek.” And when someone tells you that we’re going to be boiled alive in the ocean as commentary to the provocative vision of an erupting volcano, you listen. The charlatan, it seems, is absolved by production values.

But if Chopra is just the unqualified fantasist hedging his bets with a mixture of crazy and platitude, it is Leto who plays Nostradamus. His chilling belief that it is the Earth’s “destiny” to conquer and pillage other planets as our resources begin to deplete is the stuff of dictators and future space Nazis. It’s made even more unnerving by his monotone and the small tuft of hair sticking out from his left ear.

All this and Al Gore, Edward Snowden, Elon Musk, or Jeff Koons haven’t been in the hot seat yet. As I said, terrific.