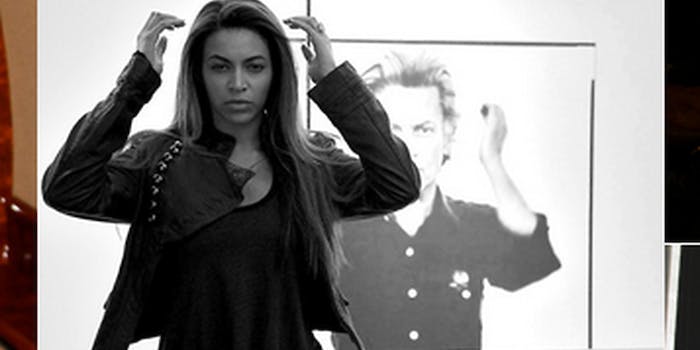 And all her "beys" were happy. Wasps, not so much.

Don’t be alarmed at the collective “squee” emitting from your computer: singer Beyonce just joined Tumblr and started tweeting.

Let’s start with the diva’s Tumblr, or Beyonceblr. It’s dazzling, gorgeous, and ravishing—just like Beyonce. Since she’s no stranger to the Tumblr dashboard—she released her first baby pictures on a Tumblr back in February—creating the blog had to come easy to her (or her people).

On her new blog, we’re treated to a mix of candid photos and personal videos. The Tumblr’s strongest feature is its perfect use of infinite scroll. The more you scroll down, the more pictures of Beyonce (and sometimes Jay-Z) you can gawk at. Look at the couple canoodling in some island oasis!

In her about section, appropriately called “I Am,” it lacks a Sasha Fierce reference but makes up for it with her writing. “This is my life, today, over the years—through my eyes,” she writes. “This is where I share with you, this will continue to grow as I do.”

It’s more than just pictures. Other sections in Beyonce’s virtual hub of news and information include “Latest” (news), “Music,” and her fan-club section, “Beyhive.” In the latter section, it breaks down what kind of “bey” you are. Scroll down and read the vocabulary part. As fans, we’re “beys” and Beyonce is “Queen Bey” so don’t screw that up. Also, haters, are called “wasps,” which would explain my love of country clubs.

It was also a momentous occasion on Twitter as Beyonce sent her first tweet on Thursday morning.

“Hey World, It’s B! I’m so excited to invite you to my new http://beyonce.com – we’ve been working hard, and it’s finally ready for you XO,” her first tweet read via her verified account.

So, Beyonce, where is your Pinterest account? Your love for swimsuit cover-ups would make the perfect first board.