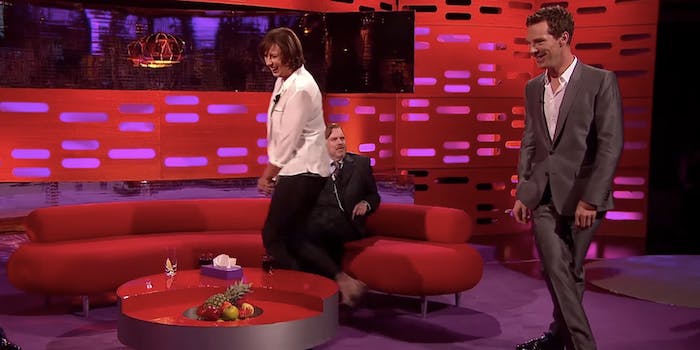 Benedict Cumberbatch is so universally beloved that if he slapped a baby across the face for no reason, a substantial portion of the Internet would find it the most charming act in the history of the world. Imagine the squees emanating from legions of Cumberbitches, then, when they saw the Sherlock star attempting to sashay like Beyoncé on The Graham Norton Show.

The fierceness starts at the 2:20 mark, with Cumberbatch being coached by Call the Midwife star Miranda Hart, as Bey’s “Crazy in Love” plays in the background.

To be perfectly honest, Cumberbatch’s strut doesn’t so much channel Queen Bey as it does a spastic Buckingham Palace guard, or a member of the Ministry of Silly Walks. But considering how well he’s pulling off that grey suit, I doubt many of his fans will really care.

H/T US Weekly | Screengrab via The Graham Norton Show/YouTube