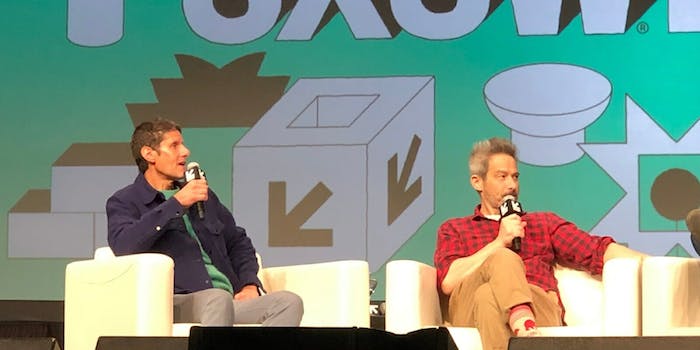 At SXSW, Ad-Rock and Mike D. continue to pay homage to MCA.

There were three chairs on the stage in Ballroom D of the Austin Convention Center for the SXSW music keynote event with Adam Horovitz and Mike Diamond on Friday. A pair was reserved for the two living members of the Beastie Boys, also known as Ad-Rock and Mike D. The other was for the Amazon Music journalist set to interview them.

But no matter how many stories Horovitz and Diamond told about growing up in New York City surrounded by punk, new wave, and rap music, or about the concert they played in Greece that nearly turned into a riot because of promotional issues beyond their control, there was hardly any escaping the idea that the third chair should have been set up for the member they had lost.

That would be Adam Yauch, aka MCA, who died in 2012. Though he’s been gone for seven years, his presence was felt throughout the large room. The screen hanging over the shoulders of the trio was the standard SXSW 2019 illustration. But it easily could have been a photo of Yauch overlooking his former bandmates and the hundreds of people in attendance.

The Beastie Boys have been back in the news since releasing their book aptly called Beastie Boys Book in October, and through their various media obligations in the past few months, it’s been nearly impossible not to discuss Yauch’s contribution to the band—and to its conscience.

“He’d always been interested in the world beyond what we were,” Diamond said. “He was always going on these trips with his parents when he was a kid. He had an interest in people in the world, and he really related to them. He’d bring that back to the studio … That’s how we grew as a band and as friends.”

One of his most important contributions to the band and its legacy was in the 1994 song “Sure Shot” when Yauch rapped the lyrics, “I want to say a little something that’s long overdue/The disrespect to women has got to be through/To all the mothers and sisters and wives and friends/I wanna offer my love and respect to the end.”

Considering the band’s early work was often construed as misogynistic, homophobic, and juvenile, those lyrics were a turning point for the Beasties and how they were seen by some of their female fans. For the rest of his days, Yauch distanced himself from some of the content from the band’s earliest days while speaking out in support of marginalized people and women.

As Horovitz and Diamond explained on Friday, the trio would usually write their lyrics together in the same room. They’d play the instrumental track over and over again, and the three of them would write rhymes in their notebooks. When one of the members was ready, they’d hit the record button and rap what they had produced. Much of the time, the lyrics weren’t exactly sophisticated and deep.

Then, Yauch took a different approach with “Sure Shot.”

“He says something super positive and feminist and reflective of us and our music and the world,” Horovitz said. “We said, ‘Oh shit, that’s fucking cool he said that.’ Then we kept going … But that sticks with you when we’re playing shows or people are later mentioning it to you. It was some cool shit. That’s as articulate as I can say it.”

“With those lyrics, we were like, ‘Whoa, this dude is changing,’” Diamond said. “This is some heavy shit. We’re moving forward as people. That’s fucking awesome.”

It wasn’t just Yauch’s progressing mind. It seemed to Horovitz and Diamond that Yauch had a wealth of random knowledge.

“He instinctively knew all these details of life,” Horovitz said. “Like he’d say, ‘I heard if you record something into the tape machine and you play it backward and it’s backward and then you can …’ It’s like, ‘How the fuck do you know that?’ We were together every day. There was no Google. We didn’t have that in the library. He just knew random shit about so many things in life.”

Yauch’s physical presence may not have been in the room on Friday, but his essence was certainly felt. Yauch, a Buddhist who was once called by Rolling Stone “the creative and spiritual center of the group,” probably would have appreciated that.