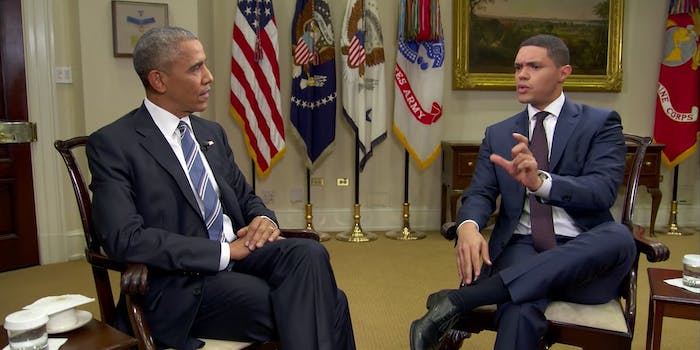 President Obama talks Russia, his after-office plans, and race on ‘The Daily Show’

'None of this should be a big surprise,' he said of the Russian hacks.

As he nears the end of his presidency, President Obama sat down with The Daily Show host Trevor Noah last night for a wide-ranging interview, including discussion over Russia allegedly hacking the Democratic Party  to help President-elect Donald Trump’s campaign

Noah devoted his entire show to the interview, which took place after Obama called for a “full review” of campaign hacks that have been attributed to Russia. Obama, for his part, said that Russia’s alleged involvement was reported even before the election. He called out the obsession over Hillary Clinton’s emails and pointed out that Trump himself asked the Russians to “hack Hillary’s emails.”

“The real question that I think we all have to reflect on is what’s happened to our political system where some emails that were hacked and released ended up being the overwhelming story and the constant source of coverage, breathless coverage that was depicted as somehow damning in all sorts of ways—when the truth of the matter was it was fairly routine stuff,” Obama said.

Obama urged citizens to still sign up for health care even though Trump has promised to get rid of the Affordable Care Act. He also discussed his legacy and what he planned to do after leaving office, noting that while he wanted to give the new administration space, he wouldn’t stay silent if Trump tried to enact certain policies, like his proposed Muslim registry.

The interview ended on a more poignant note as Obama and Noah, both biracial men, talked about how the president navigated discussions about race during his eight years in office.

You can watch the interview in its entirety below.