Behind the scenes of ‘Annoying Orange’

As he preps for the release of two new webseries, Dane Boedigheimer reflects back on the success of Annoying Orange.

After serving as a production assistant on MTV’s Pimp My Ride, Dane Boedigheimer swore off working in TV.

“I wanted to find a different way to go,” he told the Daily Dot. “That’s why I chose the Internet: It was up-and-coming, you could do whatever you want, and I really liked that freedom building an audience online.”

Boedigheimer started with a 90-second animated bit he thought up in his sleep one night. It was crude, starring an aggravating piece of fruit with a high-pitched voice, and full of forced puns. He turned it into a modern media empire.

Annoying Orange was one of the first YouTube success stories. The ongoing, weekly webseries has more than 3.3 million subscribers and 1.8 billion total views. In 2011, after two-year run, The High-Fructose Adventures of Annoying Orange, made the leap to TV—this time, on his terms.

“Things are very different now, of course, and it was all done on my terms,” he said. “I get to work with my schedule and do the things I want, and I get to work with really awesome people all-around, both on the TV show and the web show. And it makes such a huge difference when it’s that way.”

With his Cartoon Network show recently renewed for a second season, Boedigheimer’s looking to expand his channel even further. This week he’s premiering two new shows. The Misfortune of Being Ned, which follows the misadventures of a “doomed tween,” premiered today, while the street fighter-themed Thunder McWylde follows suit tomorrow.

The Daily Dot caught up with Boedigheimer to learn more about the shows and the future of YouTube.

What does a normal day look like for you?

Right now, I have a studio space where my team and I work. But typical days, I come in, I answer emails, I approve video. A lot of times I’ll help out animating or help out with editing. I will do voiceover. All of our guys that work here, we wear different hats. I’ve got two animators, and that’s all they do; they just animate. I have an art guy who just does Photoshop and art and all that kind of stuff. I’ve got two writers and then two other guys that have been with me since almost the beginning, Bobby [Jennings] and Aaron [Massey]. It varies every single day. I never know what I’m gonna do when I come into work. I just know I’ll be putting faces onto food.

How involved are you in the TV show and the webseries, respectively?

With the webseries I do all kinds of stuff, but the TV show is quite a bit different. There I’m pretty much just acting as an executive producer. I come in, watch cuts of videos, give notes on everything from how characters look to the story, things like that. Really, that’s my biggest involvement because we have a team of great writers, team of really awesome art people, visual effects people. I’m kinda hands-off. My biggest role is overseeing and making sure everything stays true to the brand and our sense of humor.

You’re one of the first major success stories of transitioning from YouTube to television. Was being able to do things on your own terms part of it?

One of the biggest things is I’ve been extremely lucky and blessed to work with a lot of really talented people. On top of that, having so many people support it on the YouTube side when it was first starting up and getting big. Everybody in the community, all the big YouTubers, they saw it and wanted to be on the show. ‘I want to be an apple that gets cut in half. I think that’s hilarious!’ It kinda became the Sesame Street of YouTube where you go and guest star and have fun. But what that does is introduce Annoying Orange to their audience and vice versa. So there’s a lot of cross-promoting [that] helped build the brand more and more.

It depends on the person, because there are many YouTube creators who don’t want to make that jump. They have no desire simply because they do like that freedom; they don’t have to worry about anybody telling them what to do and how to make their videos and what they should or shouldn’t say.

I know for me it was the thought of having a brand new challenge that I’ve never done before, and I found that very appealing. And that’s how I’ve been able to keep doing this webseries for four years. Each video includes something we’ve never done before, whether it’s a new visual effect shot or whatever it is, just so that we’re continuing to evolve and challenge ourselves. It’s different for everybody, but I totally get why some people don’t want to and why some people do.

YouTube has been called both the new Hollywood and the Wild West by the entertainment industry. Which is it?

You’re seeing so many new people come in now. It’s almost like a gold rush. We’ve already seen some of these big media companies look at YouTube and say, “Wow, there’s something here” [and] jump in and try to buy up a bunch of stuff in hopes that they can utilize that in their own ways. It’ll be interesting to see how that continues to go.

My hope obviously that there will always be some aspect of YouTube that’ll stay like the Wild West because I love that I had the opportunity to be able to do what I did, jump into the fray and build something and jump out of the crowd. I think everyone should be able to have that opportunity to create and show off their work. I think there’s still a lot of people that don’t understand it as well. YouTube is very much perceived as—by a lot of Hollywood producers, TV producers—as just stupid stuff that kids make in their bedroom, there’s no quality to it, but that’s totally not true. If you spend any time on YouTube now, you’re gonna see some crazy, amazing stuff.

How has the YouTube community changed since you originally joined it?

We’ve gone [to VidCon] every year, but this year really stood out to us because we walked around and there would be big crowds of kids around some person that we’d never seen, never heard of, never knew of until now. You can see all these different faces pop up. It really hasn’t changed as far as support systems and collaborations. There are a lot of new people popping up now on Annoying Orange.

It’s crazy to see the growth of YouTube as a whole. We’re getting a lot of new content creators, and it’s a little bit harder to stand out in a crowd right now because there [are] so many. But the support system and the collaborations, that hasn’t changed at all. Everyone still loves that, and there’s still a community aspect to YouTube.

What’s the strangest piece of merchandise you’ve seen come out of Annoying Orange?

I absolutely know the answer to that one. So I would say Annoying Orange morph suits. For those people who don’t know what a morph suit is, it’s kind of like this full-body spandex suit. They have them for Angry Birds, SpongeBob SquarePants, and they had it made for Annoying Orange. But it doesn’t matter what it is. Personally, those things creep me out. 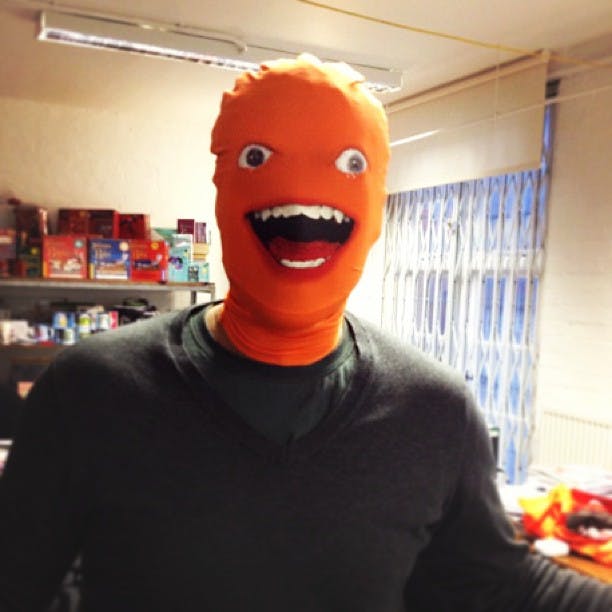 Many adults can’t stand Annoying Orange, but children can’t get enough of it. What do you think is the appeal for them?

I think people automatically dismiss it without watching it, which I think, just give it a watch. Don’t judge it until you see it because we do so many things with Orange where we’re putting in humor that kids aren’t gonna get, but adults will. I mean, we’re making MC Hammer jokes. So no kid is gonna get that, but an adult will appreciate that.

What do you think your success means for future content creators looking to crossover into other mediums of entertainment?

My hope in all of this is it helps others branch out and be able to do this kind of thing. We’re in the second season of the TV show, which kinda proves we’re doing something right. And the numbers are good enough that they want more, so there’s definitely a success story there.

Really, at the end of the day, that‘s the hope is that it opens up the door for [other YouTube content creators] to be able to be able to make that jump too—and have people not perceive YouTube as just this place where you can only watch cat videos or watch people get hit on the groin and see it as a legitimate place for really awesome content.