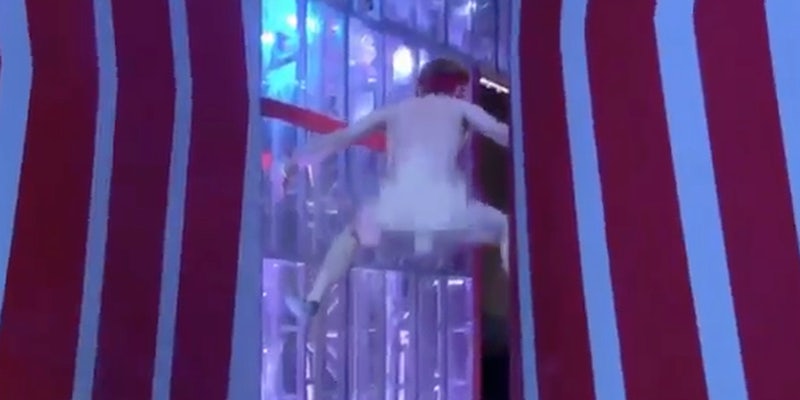 Whether this was staged or not—and most viewers seem to agree it was—this guy is good.

An unusual YouTube clip from the NBC series American Ninja Warrior has been blowing up since it aired on Monday: It depicts a man, nude except for a headband and appropriate shoes, invading and running the show’s intimidating obstacle course, stopping now and then to dance provocatively.

Whether this was staged or not—and most viewers seem to agree it was—this guy is good.

The commentators offer some canned shock as the streaker preempts a clothed competitor’s run on the course, laughing and calling the incident “atrocious” even as they praise the mystery man’s moves. When one element calls for him to do a near-split, they take the opportunity to mention the importance of prostate health. Throughout, the audience is jubilant.

The streaker is at last defeated by the difficult Warped Wall and escorted off by security guards who had respectfully held off until then. The faux scandal charmed some fans but angered others who saw it as a cheap stunt designed to gain the show viral exposure. At least one commenter insists the man, despite the pixelated crotch, is still wearing underwear.

So who is this mostly naked ninja? The video refers to a Thomas, who is employing his “Johnny Rocket alter ego” here. It was uploaded by the Tapp brothers, who have a number of parkour clips on YouTube, and we can therefore deduce that the streaker was none other than Thomas Tapp. Here he is doing similar acrobatic street tricks, just not in the buff:

Free publicity for a parkour star and a prime-time network program? Sounds like a win-win all around—and really, in Las Vegas, would you expect anything less shameless? This ploy may be an affront to the original Japanese Sasuke, upon which NBC’s show is heavily based, but you can’t accuse it of being anything other than totally American.