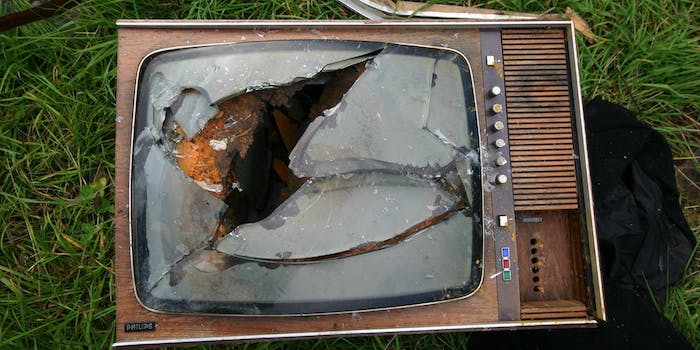 Aereo is looking to Congress, customers to resurrect it

Aereo wants you to petition Congress to bring it back.

Shuttered in the wake of a Supreme Court decision, the television streaming company Aereo is now turning its attention to Congress.

Aereo CEO Chet Kanojia asked customers to “tell your lawmakers how disappointed you are” in last week’s Supreme Court ruling, an open letter to customers published on the company’s website on Tuesday. To do so, Aereo wants customers to send a steady stream of tweets, emails, and Facebook messages to their local representatives.

“Don’t let your voices be silenced,” Kanojia wrote. “Let’s stand together for innovation, progress, and technology.”

Make your voices heard. Go to https://t.co/n4G0al31Qg and tell your local representatives to protect your right to use a cloud-based antenna

Aereo let customers stream network television by operating what became known as antenna farms. For $8 per month, a customer got matched with an antenna that picked up over-the-air broadcasts and converted them to digital video streams.

The Supreme Court ruled that Aereo was violating broadcasters’ copyrights by providing these services. In the wake of the decision, Kanojia defiantly promised to keep Aereo running.

“Free-to-air broadcast television should not be available only to those who can afford to pay for the cable or satellite bundle,” he said in a statement.

“We will continue to fight for our consumers and fight to create innovative technologies that have a meaningful and positive impact on our world.”

The next step for Aereo appears to be garnering public support in an attempt to get Congress to reconsider the nation’s copyright laws. In the meantime, Aereo may need to work out a retransmission deal with broadcasters to get back up and running.

With no revenue stream after shutting down its service last weekend, the company is in a race against time. And we all know that this slow-acting Congress does things at its own pace, not on demand.

Photo by schmilblick/Flickr (CC BY 2.0)