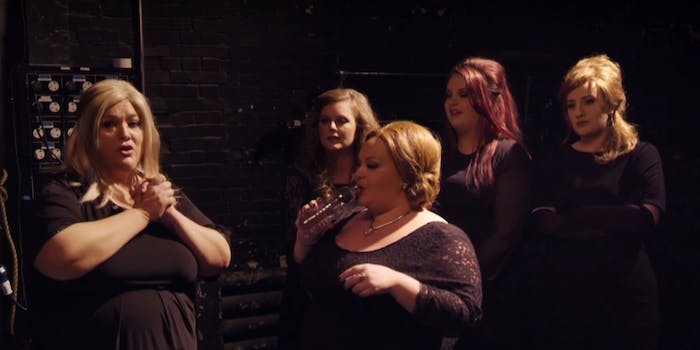 She was right there the whole time.

People love Adele. People are getting emotional listening to the new Adele album. But could you spot the real Adele among a room of lookalikes?

The singer recently stopped by the BBC to film a TV special with Graham Norton and take part in an Adele impersonator contest, but not as a judge. She actually went in disguise as “Jenny.”

Outfitted with a fake nose and chin, “Jenny” joined a group of Adele impersonators and blended right in. When she finally gets on stage and sings the first notes of “Make You Feel My Love,” the shock and awe finally ripples through the contestants.

After the event, one of the impersonators, Tallulah Windmill, told the Irish Independent: “I was chatting to her for ages backstage. When she started to be nervous I was confused as she said she’d been an impersonator for four years so I thought ‘come on love, you shouldn’t be nervous.’ I also thought she was a rubbish impersonator as when have you ever seen Adele wear gloves?”