Tangled Web: My baby bump is not an invitation for your baby advice

I'm pregnant and drowning in the onslaught of baby advice. How can I keep it off my social media?

I’m expecting my first kid, and Facebook has become basically unbearable. People will not stop giving me advice I didn’t ask for, even if I’m talking about something unrelated. For example I mentioned that I wanted a dishwasher, and it turned into a 50-comment thread about whether you should sterilize baby bottles. I haven’t given ANY indication that I want people’s feedback, so what gives, and how do I make it stop?

I gotta say…babies are pretty cute and also necessary for the survival of the human race and whatever, but MAN do they wreck social media. If it’s not a parent oversharing about Precious Eleanor’s every poop, burp, and dubious witticism, it’s a well-meaning friend or relative who can’t bear to let a pregnancy pass by without proliferating his/her choicest wisdom about how babies should be raised. 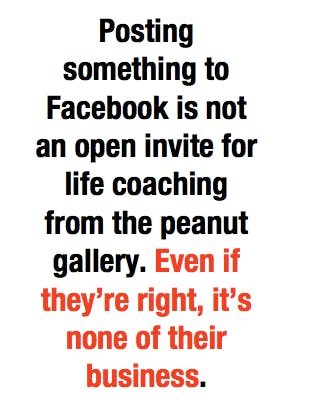 I really love the blog STFU, Parents, which deservedly takes the piss out of the first type, the oversharing mom or dad. But as far as I know there’s no equivalent STFU, Everyone Who Talks To Parents And Parents-To-Be. So how do you get your catharsis? Or even better, how do you nip this in the bud?

I suggest you think of it as training for disciplining a toddler. Your Facebook is your house, and that means your rules. All you need to say is “I know you mean well, but I’m not looking for advice,” as many times as necessary to shut people up. If they keep going, say it again. If they argue, say it again. If they won’t stop, unfriend them. They need to listen because this is your house and you are the boss.

Honestly, I don’t even care that much whether they’re making snooty bottle-washing comments on your post about home appliances or piping up on a picture of you with a blunt and a party cup to say you probably shouldn’t smoke or drink while pregnant. Posting something to Facebook is not an open invite for life coaching from the peanut gallery, and your high school friends are not your doctors, your partners, or your parents. Even if they’re right, it’s none of their business. And there are enough contradictory ideas about safe pregnancy and effective child-rearing that it’s hard to be sure what “right” even means.

I’m assuming you’re not stuffing chewing tobacco into your womb while pounding Four Loko and vodka, so, you know, it’s fine. You’re fine. Just carry on carrying, and shut down unwelcome tip-mongering the same way you’ll shut down incessant requests for cookies in a couple of years: firmly, and with no excess explanation, which tends to offer footholds for argument.

You could also set up a private Twitter or some filtered Facebook posts or, hell, a Livejournal, so you can blow off steam about meddling yentas. But make sure you pick your inner circle wisely. Nothing will ruin your safe space like a friend piping up, “Wow, so sorry you have to deal with this, and also, here’s why everyone’s wrong and I’m right.”