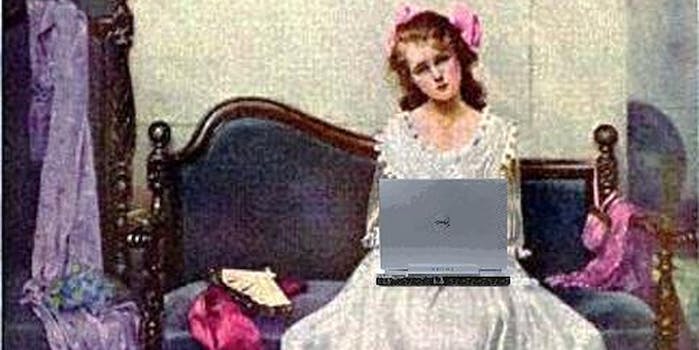 Tangled Web: Is your friend’s blog required reading? or, Oblogations

That awkward moment when you realize you really don't like your friend's blog persona.

My dear friend has a personal blog where she writes about various projects she’s working on, and occasionally veers off into her thoughts about life and death, parenting, politics, whatever comes to her mind. When she first started it I’d read it and occasionally comment, out of loyalty, but after a while I realized I really don’t like her blog personality, which is oddly annoying and smug. So, for the sake of maintaining our friendship IRL, I basically stopped reading it.

Recently I’ve noticed that in conversation she’ll often say, “I blogged about this,” as though she expects me to know exactly how she feels and has nothing more to say on the subject. When I admit that I haven’t read the post, I think she’s a little hurt, even though she claims to be writing the blog only for herself and doesn’t care if anyone reads it (which is lucky, because hardly anyone does). But the trouble is, I think she DOES care whether anyone reads it, and in particular whether I read it. Should I go back to reading it and commenting, and just suck it up and try to separate the Blog Persona from the Friend Persona?

It’s weirdly vertigo-inducing when a friend has different online and offline personalities. Sometimes it’s ultimately good news—I have several acquaintances I liked fine until I added them on Twitter, at which point I LOVED them. (It’s still kinda strange, though— like, where was this guy?) But it’s much more unsettling when someone you generally like turns out to be objectionable online. It may only happen in one context, but that still means this unpleasantness was immanent in their personality all along. It can feel like a sort of betrayal. 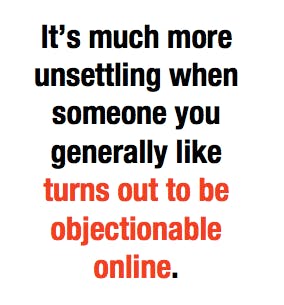 Of course, nobody likes every single aspect of their friends; you’re just usually lucky enough to be able to avoid the things that bother you. If you don’t like your buddy when she’s wearing the work hat, or the parenting hat, or the waiting at the DMV hat, you may never even find that out, and if you do it’ll hardly matter. But social media is so much of our social lives now that it’s hard to quietly avoid someone’s online persona.

Your current solution is the best one: Ignore the blog and pretend you never found out that your friend has this smug side. But she’s not letting you get away with that. This doesn’t obligate you to start reading her blog again; social etiquette is on your side if you choose to keep passing lightly over her irritating online presence in the name of maintaining social ease. Her explicit line is that she doesn’t care whether you read; she doesn’t get to take offense if you fail to second-guess that claim.

There may be a way to keep her happy without ruining your opinion of her. Before you hang out, skim her blog and take note of one or two posts that you can bring up as conversation-starters. The “Whoops, I missed that one” excuse goes down a lot easier when you only use it 60 or 70 percent of the time. Reading a few posts shows you’ve made an effort, without forcing you to overdose on your friend’s unpleasant writing voice—plus, doing it right before a visit means that if you come away feeling less than enamored with her, you’ll very shortly get to overwrite that impression with her more enjoyable RL personality.

Think of it like supporting the hobby of a friend with more enthusiasm than skill. Even The Dude goes to his landlord’s interpretive dance shows once in a while, you know? If someone you like is a lousy actress, you don’t attend all her plays, but you make the occasional appearance to be obliging—even if you have to skip out at intermission.