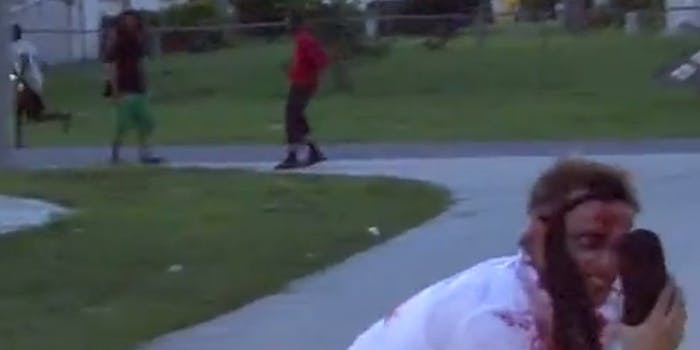 No, it's not the zombie apocalypse. It's just YouTuber Vitaly Zdorovetskiy scaring the living daylights out of half of Miami.

Everything’s showing up zombies in Miami these days. At the hospitals. On the basketball courts. Outside of the neighborhood Super 8. It’s like everywhere you look, there’s some creature of the undead wanting to snack on your skull.

The latest incarnation comes via YouTube stud Vitaly Zdorovetskiy—the man behind those How To Pick Up Girls! videos—whose recent zombie spoof video Miami Zombie Attack Prank! just lurched its way past the million views mark and has hoards of Miami natives running for their lives. Uploaded Saturday, the video’s been seen over 1,450,000 times.

The three-minute video features a series of shots in which Zdorovetskiy, disheveled beyond repair while dressed in tattered black slacks and a bloodied white shirt, chases after innocent bystanders like he’s high on bath salts and hunting for some fresh face. Some run, others hide—one guy might even reach for a gun. (Zdorovetskiy wrote in the video’s description that he was almost shot at the two-minute mark, but it’s unclear from the video whether the man actually has a gun or if he’s just pointing his arm towards Zdorovetskiy.)

Zdorovetskiy, whose YouTube channel has over 25,000 subscribers, wrote on Twitter that he came about the idea for the video while bored at the gym and thinking of ways in which he could get strangers to run from him. Assuming the likeness of a zombie made perfect sense; it was only two weeks ago that Miami police found 31-year-old Rudy Eugene feasting on the face of 65-year-old homeless man Ronald Poppo.

That episode has brought about a rash of zombie related clips on YouTube and throughout the Internet. As the Daily Dot reported last Wednesday, YouTubers uploaded over 600 videos with the tag “Miami Zombie” in the week immediately following the gruesome attack.

Zdorovetskiy’s video is now the most viewed of the bunch. It even trumps the most viewed edition of the actual Eugene/Poppo surveillance footage, which has 1,363,000 views.

Vampires were so yesterday.