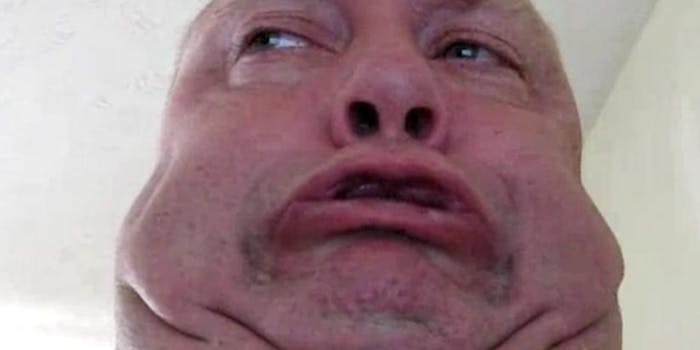 The heartwarming story behind the ugliest man on YouTube

Looks are clearly deceiving for Chester Lee Ridens, who aims to help others feel better with his short and bizarre YouTube videos.

Chester Lee Ridens is ugly, and he’s not ashamed to admit it.

“Looking back at family photos, I was always wrecking them by making goofy faces and driving my mom crazy,” Ridens told the Daily Dot. “I actually tried to break mirrors as a kid thinking it would be cool to have that type of power.”

Much to his dismay, Ridens couldn’t shatter glass, but he recently discovered a way to use his image for good.


Ridens, who is handicapped from a childhood accident, has created more than 70 short clips to date, each as equally bizarre and unprompted as the last and featuring only his signature expression.

But behind Ridens’ wrinkled chins there lies a singular message, whether it’s obvious or not: Accept the face you were born with and be kind to others.

“I want to promote that ugly people in general are good productive people who were born with a look they really can’t change so we should all treat them with respect and dignity,” said Ridens, a quality control worker at a local food plant in Dubuque, Iowa.

“Beauty is only skin deep. I once had a co-worker that was so nasty looking that it made me look beautiful. But this man was so kind, thoughtful, peaceful and happy that it changed the way I viewed people in general forever.”

His face has also changed thousands of people’s moods.

On YouTube, Ridens’ videos have been viewed more than 3.3 million times and have collected comments from people praising him, well, for his face.

“You break the rule of having a face only a mother﻿ could love,” RapIsDeadly commented.

Not everyone has been supportive of Ridens’ cause, however. His brother Herbert has told him to “grow up” after seeing his YouTube channel, but Ridens insists he’s just jealous.

“My co-workers, neighbors, and local high school kids have all been wanting my autograph after they saw me on Fox News,” he said. “They say something big will happen to me someday. The only problem is they found out where I live and keep coming to my house. The local high school showed my ‘Ugly Yet Beautiful’ video during prom and I heard the whole place erupted with laughter and applause. That made me smile.”

Yet despite his enormous YouTube success, Ridens has never accepted any offers from Google to run ads on his channel. And he doesn’t plan on doing so anytime soon.

“I will continue being a simple ugly guy who wants others to feel better about themselves even at my expense,” he said.

“It’s about helping others feel better.”