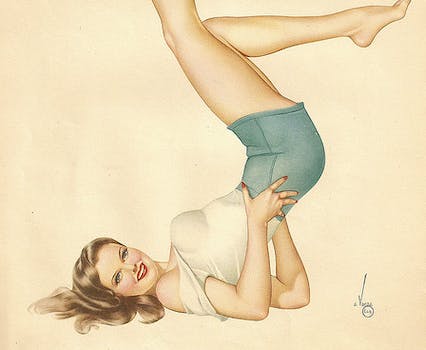 In this day and age, why should women wait for sex? Guys, are you listening?

Beth Cook is a dating coach and wing-woman who throws private dating events for San Francisco’s most awesome and unattached. She also writes and draws about her own dating experiences and would love to hear from you. Want advice? Have advice? Send her an email.

A single woman can have sex anytime she wants. It doesn’t matter what she looks like, how old she is, or how emotionally crappy she feels: There’s a guy out there right now who wants to do it with her.

All a girl’s gotta do is hop online, cruise by a bar, call a guy friend, and voila—she gets laid. It’s that simple. Grocery shopping, laundry, sex—check.

What’s not so simple for a gal is knowing when to sleep with a guy she is dating. Do old-school rules apply?

If you give it away too soon and—even though he was right there with you getting intimate on date #2—will he think you’re a slut and lose interest in pursuing a relationship?

According to the most popular dude dating advice gurus on the Internet, the answer is “yes.”

Evan Marckatz writes, “Men are sexual hypocrites. They push women for sex, then blame them for having sex. They’re particularly stuck on the idea that if a woman hops into bed with them quickly then she must have done this with lots of other men as well. This lowers her value in his eyes.”

David Wygant advises, “Be a tease! The more you tease, the more he wants it.” And, he  asks, “Knowing how much we crave the vagina, why do you give it to him so quickly?”

Because we want sex too!

What if I don’t want to create a bunch of dating hoops for someone to jump through before they get my vagaina prize? My desire for sex is no less than any man and yet I am supposed to pretend it isn’t, demurely turn down his advances, and shove my libido under the rug until date #8?

Sexual chemistry is a crucial factor in building a relationship with someone. Without great sex you’re just companions or people who date and have bad sex (eew).

Now, I’m not saying the getting-to-know-you part isn’t important (it most certainly is); let’s just not relegate a girl to slut island when she wants to cut to the sexual chase sooner than later. Instead, try appreciating the fact that she can’t keep her clothes on or her hands off you. Maybe you’ll end up with a better woman — one who doesn’t play games.