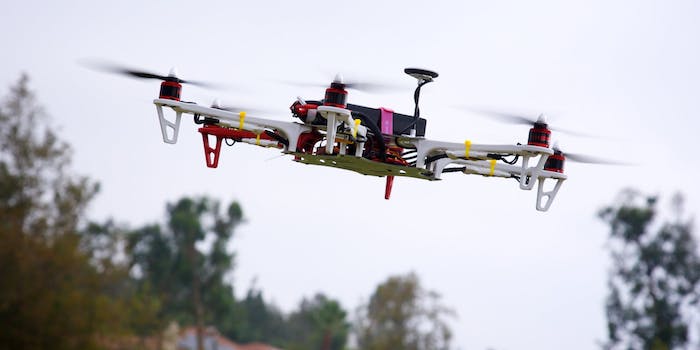 Will registering your drone keep the skies safe?

It’s a good idea, but that doesn’t mean it will work.

The Federal Aviation Administration just announced that the government will require anybody who owns a drone weighing more than .55 lbs to register on a federal system and paste their registration number to their craft, kind of like a license plate.

Hundreds of thousands of people have been flying remote control aircraft in U.S. skies for decades; indeed, even since before the FAA existed. And they never had to register anything. But they also largely stayed out of trouble.

In a study we published last week, we found that there have been more than 300 potentially dangerous incidents involving drones in the national airspace over the past two years.

And so the registration rule is fairly understandable. With up to a million new drones possibly entering the airspace this holiday season, the feds are worried that an excited new drone owner on Christmas day will go out into their backyard and fly right up into the flight path of a commercial airliner.

On one hand, the program is intended to make it easier for law enforcement to track drones that are involved in serious incidents back to their owners. But there is a subtler and more significant impulse in the program. That is to bring a sense of accountability into the droning community. The message is clear: Drones are aircraft, just like a Cessna, a helicopter, or a commercial jet. If drones can fly as high as many manned aircraft, the FAA has reasoned, they should be registered like one.

But whether or not it will work remains very much to be seen. The initiative faces several challenges.

If drones can fly as high as many manned aircraft, the FAA has reasoned, they should be registered like one.

First, there’s no guarantee that people will actually register. The process is relatively simple, and the FAA is waiving the $5 registration fee for the first few weeks of the program. But untold numbers of drones have been flying unregistered craft for years without incident—they might ask themselves, “why should I register?”

Christmas is a week away. Will new drone owners even know that they are supposed to register?

There’s also the issue of enforcement. Drone users who don’t register by February could face a hefty fine, but that’s only if they get caught. And the FAA has proven itself to be fairly limited in its ability to enforce the rules when it comes to drones. The airspace is very large, and drones, even when they are buzzing in restricted airspace, both literally and figuratively fly under the radar.

When someone takes a drone above 400 feet, the chances of getting caught by an FAA official are very slim. Even in the incidents that we studied, local law enforcement was rarely able to find the people behind the rogue drones. The chances of being caught flying without a registration number are therefore potentially quite low. And registration numbers won’t be of much use if they rogue drones that they are attached to never get found out.

The program also faces various legal challenges, most notably from the Consumer Enterprise Institute and the Academy of Model Aeronautics, the nation’s largest and oldest association of remote airplane hobbyists. They contend that the FAA has no authority to create new rules for remote control airplanes. These legal challenges could undermine the perceived legitimacy of the program, and that could seriously hamper the level of participation. The AMA is already urging its members to hold off on registering while it prepares for legal action.

Even if the initiative has some shortcomings, it should still be supported widely. Moving forward, collaboration between industry and regulators in the creation of rules is going to be the key keeping the skies safe. And the registration initiative is a great example of that kind of collaboration.

It’s going to take much more than a registration program to ensure that the full integration of drones into our skies happens safely.

The regulations are based on a set of recommendations submitted by a task force that included a variety of industry representatives. The FAA could have gone ahead and created a set of top-down rules that didn’t take into account the input of the industry. But instead it demonstrated a willingness to bring the industry into the rulemaking process. This should remain the template for future rulemaking initiatives.

It’s going to take much more than a registration program to ensure that the full integration of drones into our skies happens safely and in such a way that leaves the industry with enough space to grow. As it moves forward, the FAA could continue to draw on the expertise of stakeholders at every level, from Amazon and Google through to small, local drone companies.

Not only will this make the rules more robust, it will lay to rest any accusations that the feds don’t want the drone industry to grow and flourish. Initiatives that create fissures between the drone-using community and the government need to be avoided at all costs.

The industry, meanwhile, should recognize that the FAA’s task is significant and hugely complicated, and could benefit from their supportive participation. It is easy to complain that the FAA doesn’t care about droners. It is easy to pick holes in the FAA’s policies. But it is much more prudent to join forces with them.

And finally, whether they choose to register or not, the burden of keeping the skies safe will lie most heavily on the drone users themselves. We’ve found that airspace incidents almost never occur when drone operators remain within the FAA’s guidelines. Just as public roads would be dangerous if drivers decided that traffic signs don’t matter, airspace rules are there for a good reason.

Arthur Holland Michel is the founder and co-director of the Center for the Study of the Drone at Bard College. He has written about drones for Al Jazeera America, VICE, WIRED, Fast Company, U.S. News, Mashable, Policy Innovations, and Fast Company, among others.

Dan Gettinger is a founder and the co-director of the Center for the Study of the Drone at Bard College. Dan has written for Drone360 and Motherboard and has been quoted or cited in the BBC, NBC News, Wired, The Verge, Forbes, WAMC, The Intercept, TakePart, among others. He is the co-author of The Drone Primer: a Compendium of the Key Issues. Dan holds a B.A. in Political Studies from Bard College.