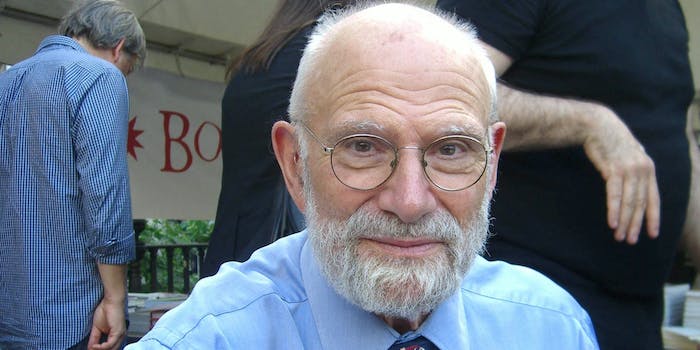 The loss of Dr. Sacks is a tragedy—in more ways than one

Why we’re in desperate need of more charismatic scientists.

Oliver Sacks, renowned neurologist and communicator of science, died Sunday at the age of 82. His loss is a tragedy—in more ways than one.

Dr. Sacks beguiled many with his meditations on the brain and some of its more bizarre dysfunctions. He told stories through his patients afflicted with unusual maladies of memory and cognition–such as in The Man Who Mistook His Wife for a Hat. And, through his deep empathy for his patients and his crystalline understanding of what we know and don’t know about the human body, he made accessible an incredibly human discipline by, well, humanizing it.

Too often doctors and medical scientists shy away from humanizing their work. They stay within clearly defined clinical parameters—and for a lot of good reasons. Often they don’t want to misrepresent or mischaracterize their work by oversimplifying it or dramatizing it—criticisms some lobbed at Dr. Sacks according to an obituary in the New York Times. But Dr. Sacks’s dramatic flair is what drew people in—and we’re in desperate need of more charismatic scientists.

According to a 2015 Pew Research report, biomedical sciences boasts some of the widest gaps between scientific and public views. For example, 37 percent of U.S. adults believe consuming genetically modified crops is generally safe, whereas 88 percent of U.S. scientists believe consuming such products is generally safe. Look through the comments section on any article about the recent results that more than half of 100 psychology studies’ results could not be replicated and you’ll see immense distrust in science.

But Dr. Sacks’s words had a way of reaching through the page and engaging with the reader that is not typically seen in doctors and biomedical scientists. For the uninitiated, the Atlantic compiled a comprehensive list of Dr. Sacks’s best writing available online.

It seems paradoxical disciplines like astronomy and physics, though more removed from humanity than medicine, are seen by the public as romantic and exciting. Dr. Sacks had a way of injecting some of that wonder and magic into the science of the brain.

What made him so special is also what makes his loss so tragic. No one can replace Dr. Sacks, but people of his ilk shouldn’t be as rare as they are. We need more people like Dr. Sacks—doctors and scientists who can use their unique expertise to enchant readers with exciting stories, beautiful prose, and lucid science.