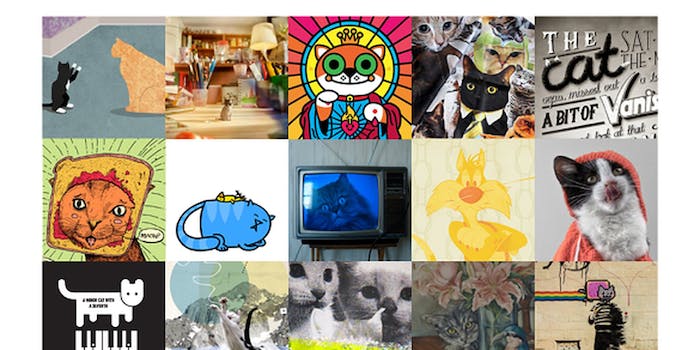 A critical jaunt through LOLcats teh Exhibishun

An art historical jaunt through the space/time continuum of LOLcats, the exhibition.

The Royal Academy in London opened a once-in-a-generation Manet exhibition this year, on the 26th of January. But all the talk, from the BBC to the HuffPo to the Independent, was of the show that opened just a few streets away and just a few days earlier: the world’s first LOLcats exhibition. Or rather, exhibishun.

The show closed yesterday, on February 15th, after a booming run. As the holder of a trusty (albeit rusty) Courtauld degree, I thought I’d take a look at this era-defining exhibishun while I still could. So, with a couple of pints to heighten my critical faculties, off I sauntered to experience the sublime beauty and zeitgeist of an LOLcat.

Located in the Framers Gallery just off of Charlotte St, a few intimate rooms contain some 49 cat-based works in a variety of media. There were plenty of punters taking a look on a Saturday afternoon; a variety of ages and nationalities, from young couples giggling at the walls, to family groups of Japanese tourists gathered in apparent awe, to single men in their mid-30s with a throbbing hangover who really should have weightier things to do with their time. This all proved a pleasing microcosm of the LOLcat’s global online appeal and of the number of good pubs nearby.

Presented like many of the other contemporary galleries in this young and media-centric area, the works were classically mounted on plain white walls. A TV screen in the corner showed a video of Kat & Bird Iz Seriez ov Animatd Shorts All Bout Errrrr Kat an Bird; a silk scarf with a montage of cat faces like a feline, mass-burial Turin Shroud awaited on your way out; whilst Hypno Kitteh bought back the previous evening’s gin.

The brief publicity pamphlet I grabbed on the way in lead with the paramount question: “Can we take the LOLcat phenomenon and raise it to the level of art?” Let’s be honest, it’s hard to envision a future where in a hundred years time the Royal Academy hosts a centennial LOLcat retrospective with this exhibition cited as having the seismic effect of 1863’s Salon des Refusés.

On the other hand, how fun to try to compare an illustration of a gold, Chanel-blinged Sylvester (Meow in Style) to the man who shocked nineteenth century France with his scrapping of traditional painterly genres. What a vivacious and thrilling artistic jaunt of criticism, to wonder how, as the BBC has so wittily asked “you can express your emotions through the medium of the cat, through their intelligence and curiosity”? Does the LOLcat provide us with some timeless insight into humanity, like Poussin’s Et in Arcadia Ego or Bosch’s Garden of Earthly Delights? Does it touch on the human condition, needs, fears, desires and our  development as a species? Or is it just amusing to watch videos of a pissed off tabby walk down a piano keyboard?  And, despite some works costing from £15 (unframed), I’d also ask whether you’d wish to spend some two thousand pounds on The World’s Smallest Cat?

We’ve entered a world in which it’s only a brief stroll down an alley wall from the world’s office workers laughing at a cute kitten to global interest in a unified collection presented in London. What’s next, the Tate Modern’s Turbine Hall filled with the echoes of a thousand screens playing discordant videos of a thousand cats on a thousand pianos? Would that be Art, or Hell?

The first piece I noticed upon entering were three photographs of cats in orange knitted boilersuits: The Katnip Kartel. Three cats belonging to a peurilely misspelt gang imprisoned for their control of a catnip ring.  Initially intrigued, I took a look at the price tag. These are for sale at some two hundred quid framed, or fifteen pounds unframed. Did I mention this exhibition is being held in a framer’s showroom?

Then I came ponderously to the Keyboard Cat, based on cheat sheets for chords. Here the finger positioning has been cunningly substituted for the figure of a cat, reminding us of the classic, formative videos of the pianist pussies. Through my beery fog, I seem to have noted a reference to one Catmaninoff at the bottom of the piece. The wit. 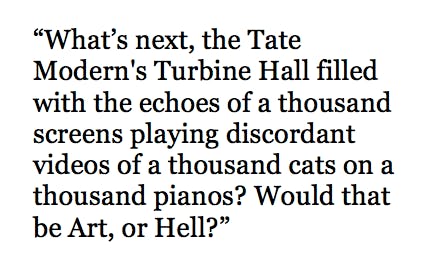 After all, LOLcats is nothing if not punny. After a few of these wordplays (R U Fur Reel, Hail Lucipurr, Tailors) one comes to the Learn To Speak Cat series, a series from the London Metro I fondly recall from countless overcrowded commutes through the rolling fields of Honor Oak Park and Brockley. Saying that the picture of cats on the tube (Cats with 9 to 5 Lives) was probably the apex of the wit on display is probably one of the best ways to communicate the mood, the intellectual weight, the gravitas of the show. As Clement Greenberg so wisely put it, the making of superior art is arduous.

I Has Found Wormhole! is a thought provoking two picture composition that brought to mind the National Gallery’s prized Wilton Dyptch, combining, as it does, the image of a cat walking towards you and one of it walking away from you. Apparently, this piece, “pays homage to the extra-terrestrial pursuits of the feline species… their interplantery mischief and flagrant disregard for the space time continuum.” Well, it does remind me rather strongly of Percy Shaw’s invention of the cat’s eye, and the belief that, had he been driving behind the cat rather than towards it, he’d have invented the pencil sharpener.

Actually, there is plenty of fine draftsmanship on view in this landmark exhibishun, from the aforementioned silk prints to some eloquent poetry and illustrations, from the imposition of The Biggest Cat in the World over an Asian landscape to a cartoon strip of a cat putting it’s head through some bread in Butr Kitteh. Despite this, much, however, sadly falls just a hair’s breadth shy of its attempt at an “elevation to art,” even when applying Gombrich’s ideas of schemata as from Art and Illusion.

Monorail Cat, for example, is a tube map designed like a cat’s face, with puzzlingly named cat-related stops (The Mackerel Line, Long Cat, Banana Cat—no? me neither): a charming and contemporary way to commemorate the 150th anniversary of the tube. The watercolor Murdoch Kitteh Says Shhh transposes Rebecca Brookes into cat form, with a sinister feline Rupert Murdoch instructing her to destroy sensitive documents. Nyan Cat – Sydney Vacation features a digital cat running across what looks like a Banksy— channelling Duchamp, I’m guessing.

Jenny Theolin, the curator, has said she is delighted by the interest shown in the show and by the attendance figures. In the end, LOLcats was hardly intended to challenge Manet, so one musn’t be too harsh. It is, after all, at its finest and at its worst, a grouping together of cat pictures. (And, in all seriousness, 50% of proceeds are being donated to the wonderful Battersea Dogs and Cats Home).

Kate Miler, author of Srsly Phenomenal: An investigation into the appeal of LOLcats, described the LOLcat as “a venue for expressing our feelings and dissecting our foibles,” which is a noble belief and perhaps justifiably places the LOLcat high in the artistic pantheon, not a million miles from Ted Hughes’ paean to the noble pike or Tennyson and the roses in his Maud.

Certainly, a perusal through the guest book as I left (a wiser man, possessed of a greater self-awareness) demonstrates how popular the show has been and has attracted such interest that we now have recorded for the ages comments of weighty artistic consideration such as, “I’m in ur visitur bewk, leevin ur comment”, “I can haz all the pikturs?” and, er, “I baked you a cookie… but I eated it”.

Coolidge’s Dogs Playing Poker was used to flog cigarettes by illustrating the pleasures of smoking, drinking and playing cards ninety years ago. Is a bunch of gambling dogs more or less human, more or less powerful than the LOLcat’s complex wrestling with the space/time continuum? Do they work as art rather than just being ideal as a meme?  Who knows. Maybe. Or maybe, when the photographs come down and the frames get sold, we’ll just be left with a vacuum full of cat hair.

Charles Webster is a keen follower of London’s social and cultural life; having been around since the Cool Britannia days of the mid-90s he is an occasional contributor to online restaurant reviews and is keen to bring the word flaneur back into common parlance. Follow him @cwebby76.

Image via LOLcats Teh Exhibishun